Kevin Griffiths, senior vice-president, cabin crew, at Emirates, said: “There is a lot of noise of people doing things with tablet devices, but we are an airline of firsts.”

He said the airline first used tablets in 2004, starting with HP, then moving to Lenovo Windows-based tablets.

“To support our crew, we have created an application on Windows 8 that delivers a unique, personalised experience, with the necessary information for our cabin crew to better serve the needs of customers,"said Griffiths.

"The Windows 8 platform running on HP ElitePad 900 devices gave us this option, allowing us to create the KIS [Knowledge Driven Inflight Service] app that enables our crew to offer an experience not available on other airlines,” he said.

Emirates has been working with Microsoft since December 2011. It took the stage at the Windows 8 launch event in Dubai as the official launch partner of HP's ElitePad 900 Windows 8 Enterprise tablet.

The device runs the standalone KIS application, which replaces paper-based processes. It synchronises with the corporate systems before take-off and when the aircraft arrives at its destination. It provides cabin crew staff with alerts on security, tracks passenger seat swaps and takes payment for upgrades via the in-flight duty-free system.

It also pulls data from the flight quota and HR systems to give supervisors a view of every member of cabin crew, allowing them to see the grades, nationalities and language skills of the staff on board.

The tablet allows staff to enter comments and report incidents directly, via a bluetooth keyboard or one built into the tablet's case. Again, the information is synchronised with Emirates' core IT systems.

HP was selected due to the greater level of standardisation its new tablet offered compared with those of other manufacturers. Emirates will have its own equipment to replace broken screens and damaged backs on these tablets. The battery is also replaceable, although the device will need to be sent to a service centre to fit a replacement battery.

According to Griffiths, a Windows 8 Enterprise tablet was selected over Windows RT, due to the fact that the company had spent three years developing management systems for Windows tablets and legacy software that prevented the use of Windows RT. Its Connection Manager, network access client software is a Win32 application, which means it cannot run on Windows RT.

Compared to the new HP tablet, he said the old tablet was quite heavy and needed to be stationed in a permanent location. Emirates will initially roll out the new device to 100 staff during December. It will then be rolled out to up to 900 staff in early 2013. 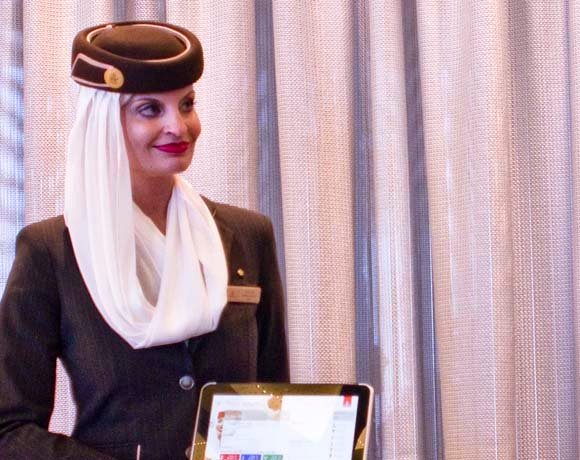 Tablets save time for Emirates crew

In preparation for the roll-out, Emirates has run workshops with 100 early adopters. Staff selected for the early adoption programme came from different technical backgrounds, to enable the airline to assess how staff with differing levels of IT competency coped.

Emirates has also used the Windows to Go functionality to run the software on existing devices to familiarise staff with Windows 8 and the new application.

“We made a conscious decision to give people the device, so they take ownership. They can take it home and carry on working,” said Griffiths.

Along with KIS, the HP tablet will also provide staff with access to work email and a crew app which allows staff to see which of their colleagues are working on the flight.

Griffiths said the project was run as a skunkworks project: “This project was user-led.” The IT expert at Emirates talked with cabin crew staff to find out how they could do their jobs better.

The devices had their maiden flights on Sunday 18 November, when the new tablet was used in three flights to Dubai – from London, New York and Hong Kong. “The feedback so far is it makes lives easier,” he said.

One senior cabin crew member who used the HP device on the Hong Kong flight said: “I used it for the first time yesterday. It used to take me 20 minutes to assign crew before flights. Now it just takes a few minutes.”