Chief information officers are facing an austere 2012. Spending on IT will rise on average by just 0.5% worldwide, but IT budgets in the UK, Europe and North America are declining.

And yet, a worldwide survey of more than 2,300 CIOs by Gartner’s executive programme shows that technology has never been more important to businesses. They see technology as a route for helping them grow and remain competitive in the downturn.

CIOs in the UK have been hit relatively hard, with average budget cuts of 1.8%, in contrast with growing IT spend in France, Spain and Italy.

“People are talking about our credit rating because of what is happening in the rest of Europe, and it has had a knock-on effect,” said Aron.

Drill deeper into the figures, however, and the situation looks less bleak. Budget cuts are concentrated in larger businesses, which are more exposed to world economies.

Smaller firms are stepping up their spending on IT, as they take advantage of new, low-cost, cloud services. 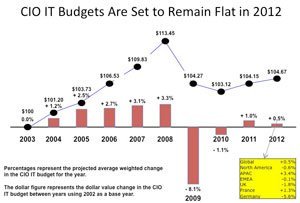 In Western Europe, CIOs in larger businesses are faced with the irreconcilable demands of cutting costs and using IT to help their business grow. They are having to think more creatively than ever before.

The watchword for CIOs this year will be creative destruction, said Aron. This means simplifying IT infrastructure, reducing running costs and refocusing IT resources on projects that will help the business grow.

Organisations are investing in business analytics, cloud computing and mobile technology, as they try to grow their businesses in a touch economic environment.

CIOs miss out on social media

As businesses become more reliant on technology, control of IT spending is spilling beyond the IT department, Gartner's research revealed.

CIOs control an average of 60% of an organisation's IT spend, but other departments, such as HR and marketing, are investing in their own IT platforms.

CIOs are in danger of losing the initiative when it comes to social networking technology, in particular. 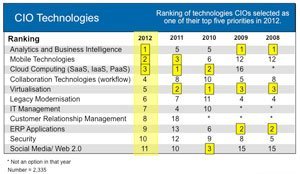 It is not that the CIOs don’t recognise its importance. Over a third of CIOs surveyed identified social media as a key area for innovation in their organisation, yet they lack the time, resources and capability to take ownership of it. It features in 11th place on their list of priorities.

“For CIOs, that means it is not on their radar,” said Aron.

The business and IT mix

Faced with these competing demands, CIOs need to recognise that they cannot do it all.

Aron predicts the emergence of specialist CIOs with expertise in areas such as mergers and acquisitions, growing the business, or managing the infrastructure.

“There is a choice to be made as to what kind of CIO you want to be,” he said. 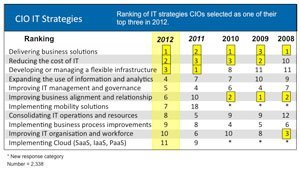 Working more closely with the business should be a priority for CIOs in 2012, Aron said. Gartner’s survey confirmed that the most successful organisations have highly integrated business and IT strategies.

“Those companies that get the most out of IT actually consider IT capability when they are considering business strategy,” he said. “The next biggest thing that made the difference was whether stakeholders outside of IT understood the IT strategy.”

“Today it's not just a case of 'I want a Java programmer'. CIOs are looking for people with a mix of technical, behavioural and business skills,” he said.

Develop a clear IT strategy

With IT budgets under pressure, it is more important than ever for CIOs to have a clear IT strategy, and to stick to it.

“We would say strategy is a priority. Don’t make knee-jerk moves that will lose your agility for short-term cost savings," advised Aron.

Mobile
Mobile technology has been rising up the list of CIO priorities for several years, and is now in the number two position.
Businesses have come to the conclusion that equipping their workforce with laptops and smartphones, allowing them to work remotely, is essential if they are to grow in the downturn.
Gartner asked CIOs what their attitudes to mobile computing were. “Essentially, everyone wanted to be a mobility leader,” said Aron.

Cloud computing
Cloud computing ranks third in CIOs' technology priorities in 2012.
The research shows that CIOs are now convinced that cloud is a serious technology – rather than supplier hype.
“Last year, a lot of CIOs were very worried that cloud was still a lot of hype, particularly public cloud. This year, it is different,” said Aron.
Small companies, in particular, are buying into cloud services which offer processing power that was previously only available to the largest companies.