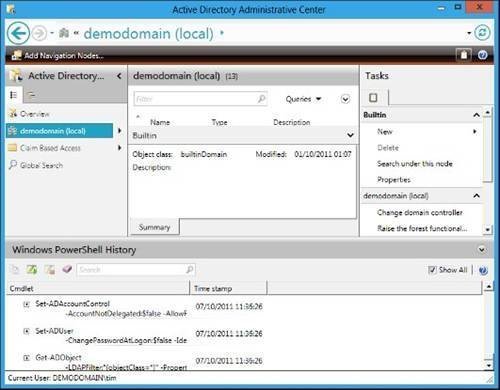 Microsoft is not retreating from graphical management tools, but there are two important changes. One is that you are expected to run management tools on a remote client, not on the server itself. The new Server Manager will run on the Windows 8 client. The second change is that the new GUI tools are a thin layer over the PowerShell scripting and automation tool. There are now over 2,300 PowerShell cmdlets, with comprehensive coverage of Windows server including areas like Hyper-V which were not previously covered. Some of the new GUI tools, including the Active Directory Administrative Center shown above, let you see the PowerShell commands they generate, which is excellent for learning how to replicate the same actions in script. You can script locally or remotely. Scripting has several advantages, including the ability to target multiple machines with the same script, perhaps just changing one or two arguments.