London’s Air Ambulance has slashed emergency dispatch times by as much as two minutes after deploying an incident information and routing app developed by software lab Mubaloo, a development partner of mobile network operator EE.

Up to now, 999 dispatchers would have to take down information from distressed or injured callers and relay it to paramedics, who would again be forced to write everything down before they could figure out what was needed and dispatch it in a timely manner.

On top of that, London’s Air Ambulance’s flight crews had to rely on patchy sat-nav equipment, and sometimes even used printed A-Z maps to navigate their way through the skies over London.

Mubaloo’s app – first of its kind in the world – provides the charity with situation information, such as details of injuries, navigation information, including real-time flight and routing data, and a connection to the London Ambulance Service’s emergency operations centre over EE’s 4G network direct to tablet devices owned by the service’s paramedic teams.

EE and Mubaloo worked together to study and understand the emergency dispatch process in intimate detail, reviewing details of how 999 call data is processed and managed, the on-board needs of the helicopter pilots and the navigation challenges faced by ground-based teams.

The resulting software enables the doctors and paramedics to focus on getting to the scene as quickly and safely as possible, according to London’s Air Ambulance, by taking away much of the legwork associated with the dispatch process.

Mubaloo London managing director Sarah Weller said London’s Air Ambulance is a truly mobile operation, providing mobile care and assistance to those most in need and, like many organisations, there are operations and processes that are unique to the charity.

“With 4G helping to improve the speed of third-party apps, it was clear that taking a custom approach would deliver further benefits. EE’s 4G network means the app has a reliable, direct data connection to ensure it is always updated with the right information,” she said.

The charity claimed that since deploying Mubaloo’s app, it could now dispatch its helicopter or rapid response cars – used in inclement weather or at night – in under 10 seconds in some cases.

Gareth Grier, clinical director and education lead at The Institute of Pre-Hospital Care at London’s Air Ambulance, said that out of the 5,000 emergency calls received by the London Ambulance Service every day, it typically sees six patients whose injuries are so critical that they need additional specialist treatment at the scene before they get to hospital.

“Even reducing the time we take to get to our patients by 10 seconds could, in some instances, mean the difference between life and death,” he said.

London’s Air Ambulance is based at the Royal London Hospital in Whitechapel and dispatches its advanced trauma teams to around 2,000 incidents every year. Its McDonnell Douglas MD-902 Explorer can reach any point inside the M25 within 15 minutes.

It has flown 30,000 missions since its inception in 1989 – just over a third of them in response to road traffic accidents – and helped co-ordinate emergency medical response to a number of major incidents, including the Paddington and Southall rail disasters and the Admiral Duncan nail bombing. Following the 7 July 2005 tube and bus attacks it dispatched 18 teams and triaged and treated more than 700 patients.

London’s Air Ambulance is funded entirely by donations and corporate sponsorship, and is currently raising money to buy a second helicopter. 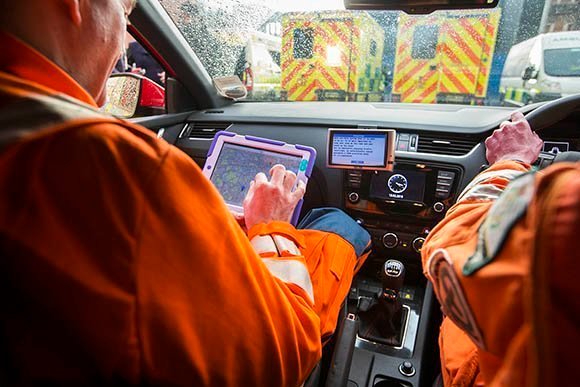 The first of its kind, London's Air Ambulance app from Mubaloo is optimised to run on EE’s 4G network and could help save the lives of hundreds of critically injured patients each year