The cloud market is witnessing renewed interest in bare metal, for which providers have offered services since 2009. But bare metal has recently been brought to the mainstream, with Mirantis’s OpenStack Express release, IBM SoftLayer’s move to provide bare metal servers on an hourly basis and Rackspace’s launch of single-tenant, bare-metal infrastructure as a service (IaaS).

Bare-metal cloud servers can be delivered via a cloud-like service model but are not virtualised and do not run a hypervisor. Bare metal cloud eliminates the overhead associated with virtualisation but does not compromise flexibility, scalability and efficiency.

IBM SoftLayer has the most comprehensive bare metal infrastructure, with options such as SSD storage, redundant power supply, GPU and even dedicated racks with assured low latency connectivity between servers.

Internap recently expanded its bare metal cloud service to Hong Kong and London. Canonical has an offering called Metal as a Service (MaaS) to provision bare metal through their Juju tool chain.

But SoftLayer’s new bare metal servers that can be deployed in under 30 minutes and billed by the hour to provide the raw performance of physical servers, Rackspace’s OnMetal cloud servers and Mirantis’ top down OpenStack cloud  - all released this summer - show that providers are rushing towards bare metal.

With AWS, Azure and other commodity IaaS providers offering high-density virtual machine-based hosting, customers do not get predictable and consistent performance from compute, storage and networking services.

This is more evident when I/O intensive workloads, such as Hadoop, are deployed on the virtual machines. Despite the advantages of the running the data nodes on an elastic fleet of servers, Big Data workloads are moving to physical servers.

When running on the conventional public cloud infrastructure, customers resort to techniques such as over provisioning the virtual machines (VMs) and larger chunks of block storage to influence the CPU and IOPS throughput.

Since bare metal doesn’t use a hypervisor, it is expected to deliver better performance due to the single tenancy. AWS competitors use this point to effectively counter the “noisy neighbor” problem that Amazon customers often complain about.

Championed by Facebook, OCP claims to offer better efficiency at a lower cost. Though it has a long way to go, OCP is gaining attention of the infrastructure providers. At VMworld 2014, VMware announced that the new EVO:RACK hardware will be available on a gear that meets Open Compute standards.

Earlier this year, Microsoft joined the Open Compute Project by contributing the design of its global datacentres running Azure and Office 365. OEMs such as Dell, HP and IBM are closely watching the developments of OCP. There are some concerns around the licensing terms that are restrictive. Despite the concerns and skepticism, companies such as Rackspace are betting on OCP for delivering bare metal cloud service.

3. OpenStack’s role in pushing bare metal to the fore

OpenStack is playing a key role in pushing bare metal to the mainstream. It has an incubated project called Ironic that enables bare metal provisioning.

With native support for bare metal, Nova, the compute service of OpenStack, can boot a server through PXE without relying on the hypervisor. This avoids the “noisy neighbor” problem by dedicating the server to a specific workload.

By standardising on the APIs and the orchestrator, providers are looking at OpenStack as an enabler of bare-metal based cloud platforms. Both Rackspace and Mirantis are leveraging Nova for on-demand provisioning of the servers.

With OCP and OpenStack standardising the hardware and cloud orchestration stacks, cloud service providers need a lean and mean operating system that is designed to scale.

And that is exactly what CoreOS is all about. Based on the open-source Chromium OS, CoreOS does not have the overhead of the traditional Linux distributions. It doesn’t even have a package manager to deal with the software and dependencies.

Finally, Docker has a huge impact on the bare metal cloud market. With its potential to replace the hypervisor, bare metal cloud service providers are embracing it to isolate the workloads without the overhead of virtual machines.

Based on container technology, Docker makes it easy to package, deploy and maintain isolated containers that share the same kernel. Spinning Docker containers are fast and cheap compared to VMs.

A single bare metal server can host more containers than the number of VMs it could potentially run. This brings high density workload hosting without compromising on the performance and predictability. CoreOS is the ideal OS for running Docker based containers.

A bare metal server that is provisioned via OpenStack boots into CoreOS, which will then download and run containers hosting customer workloads. This process is automated, which is typically initiated through a self-service portal. Ultimately, the customer gets the best of both worlds – cloud and bare metal. 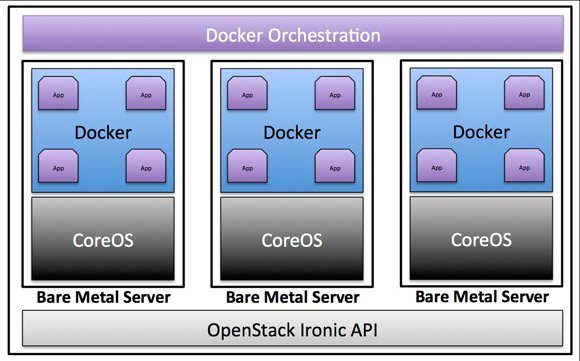 It will be interesting to see how far Open Compute Project, OpenStack, CoreOS and Docker drive the bare metal as a service.

About the author: Janakiram MSV is a Gigaom Research analyst and the principal analyst at Janakiram & Associates. He is a regular contributor to Computer Weekly and can be followed on Twitter at @janakiramm.