Client-facing technology and a major back-office refresh are key areas of focus for Starbucks as the company’s customers become increasingly tech-savvy and business expansion continues.

Despite the current tough environment for retailers, Starbucks has continued to invest in technology – particularly mobile projects, which is something chief executive Howard Schultz has long been advocating.

Robert Teagle (pictured) leads the company’s IT strategy across the 30 markets that Starbucks owns and operates in Europe, the Middle East and Africa (EMEA), supported by IT teams in the UK, Amsterdam, France and Germany. Technology focused on the customer is at the heart of his strategy.

“A lot of our customers are very active in social and mobile, so technology is very much a core part of our business. Free Wi-Fi, the experience they might have at the point of sale and our mobile applications are examples of that,” Teagle told Computer Weekly.

“Our job is to ensure we can support all that. I don’t know exactly how we compare to other restaurant chains, but there’s probably a group, like us, that try to keep up with technology, and others that don’t. We like to be in the former category, to deliver as much as we can to our customers.”

The mobile strategy at Starbucks is heavily driven in the US, UK and other major markets through its two apps, which are now in their third iteration and available both in iOS and Android versions, the former being the most advanced.

As consumers flee the high street and shopping centres – where most Starbucks shops are located – in favour of buying online, the coffee chain has been introducing features to respond to that trend, with more planned for 2014.

“We think of mobile as a way for our customers to interact with us. The mobile application we have today is very much built around loyalty and our loyalty platform. You register, come into the store, count your visits, use your mobile phone application to pay, all though the apps. Now we are looking at things like personalisation and communication with our consumers via the mobile channel,” says Teagle.

One such example of mobile functionality is the company’s click and collect service, which allows customers to pre-order drinks on Starbucks’ mobile app and pick them up in due time, and aims to reduce queues in stores. Already in place in some major markets, Teagle says the company is looking at further expanding the service across Europe.

“The goal is to keep as much as we can to the mobile. Two or three years ago we were looking at where we could put television screens in stores, only to find that people were bringing their own screens, which is why we want to provide our consumers with more mobile tools to enrich their experience in our stores,” he says.

When it comes to offering tech facilities to customers, Starbucks has been offering free Wi-Fi in its coffee outlets for years. However, Teagle noticed a recent shift in the way customers use the service.

“We have seen that uploading has become a lot more prevalent in the past 12 to 18 months, and we had to look at the markets where we had an upshot in bandwidth usage,” he says.

“From my personal experience, if a place offers Wi-Fi and it is bad, it is unlikely I will return. There’s no going back, and if [a change in customer behaviour] means upgrading the Wi-Fi experience, we will do that.”

According to Teagle, the IT team and operations are in constant conversation about evolving the current customer-facing technology.

“It’s a debate we have with store operations all the time – what else can we do with technology in the stores? In the US we’ve done pilots for things like charging facilities, so there are lots of things on our radar, lots of ideas.”

The recent and future improvements in mobile would not have been possible if Starbucks had not previously undergone a major refresh of its underlying technology.

We think of mobile as a way for our customers to interact with us. We are looking at things like personalisation and communication with our consumers via the mobile channel

“Over the past three to five years we focused heavily in uplifting the back-office functions. We continue that ongoing modernisation, but also driving retail technology projects that really affect our customers,” says Teagle.

Starbucks roasts coffee in Amsterdam for the EMEA region, and all aspects of production, including logistics and accounting, go through an Oracle enterprise resource planning (ERP) platform. This will be updated soon – a significant project for the team, which also provides the foundation for other new technology.

“With the ERP platform it’s probably an evolution rather than a revolution. We have evolved it over the past three to five years and now we’re about to upgrade it to Oracle version 12,” Teagle says.

The Oracle upgrade will probably start in the European summer and should be ready by summer 2015.

The improvements on the back end follow the replacement of the company’s previous DOS-based point of sale (POS) system with a platform provided by Micros for 42,000 tills across Europe.

“Pretty much all of our tills are very current on their versions. We decided to pretty much move to the latest POS technology to enable us to do lots of things like mobile, with loyalty, mobile payment, etc. We couldn’t do that using the old technology.”

Starbucks uses a Siebel customer relationship management (CRM) product as its loyalty system, which is tied to the Oracle ERP platform. When it comes to big data, Teagle says the company does traditional analytics as well as some more innovative work in that area.

Read more about retail IT

“We have a data warehouse to capture more traditional, transactional data, and our ERP platform drills down to the store-level detail of that information and provides the reporting on world consumer data for driving our business forward. So we are kind of doing a little bit of both from the big data perspective,” he says.

“We’re not on the leading edge – we have tools to get access to the data, but we are still learning how to use that data in a meaningful way that helps us improve the customer experience. It has been a big area of discussion – we are always talking about how to use that data to try to move our business forward,” he adds.

According to Teagle, the business units are the main generators of demand for data: “It’s pretty much business demand. We then do the more ‘under the covers’ sort of work to deliver the insights needed.”

Teagle offers a flavour of what might be coming next in Starbucks’s technology innovations.

“We have to ensure that we keep updating our technology, but there is a lot more going on, including new things such as vending machine technology,” he says.

“Our company is still growing and we are developing new business channels, so we've got to put some technology in that. We are also moving more into franchising, which also requires technology work. It’s an ongoing journey of doing things more effectively and in an innovative way.” 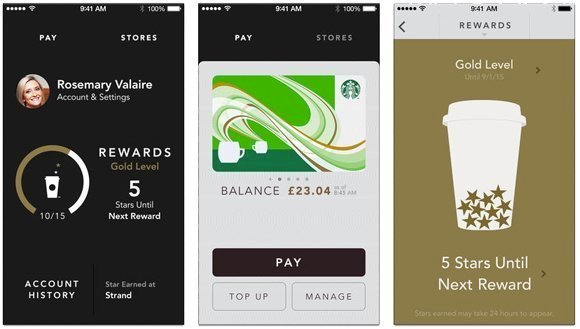