A study conducted by Vanson Bourne for HP has found almost two-thirds of mobile workers cannot work effectively due to connectivity issues.

In the survey of 600 people across Europe, 62% said their ability to work was limited by lack of connectivity (see graph below).

Almost half admitted they found it hard to make time to work when travelling because their business devices lacked sufficient battery life.

In a roundtable discussion covering the results of the study, Malcolm Greenhalgh, CTO of GlaxoSmithKline, said: “There will always be issues of connectivity. We need to make sure applications are available from outside the office.”

Commenting on the battery life issue and the fact the effect of Wi-Fi connectivity on battery life, Neil Shorthouse, head of local delivery for IT services at Coventry University, said: “I am not sure why the IT industry hasn't come up with a way to switch off Wi-Fi automatically.” 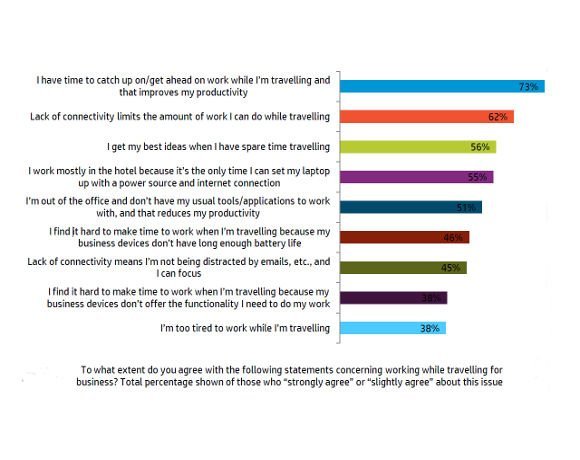 Devices powered by Intel's latest Atom processor, the Z3000 Series have a claimed battery life 10-plus hours, but most laptops generally struggle with around five hours of battery power.

While many regard an always-on internet connection as essential, live connectivity is not always necessary for them to get on with their jobs. At Coventry, students can view pre-recorded videos of lectures in their own time instead of sitting in a lecture room. Although an internet connection is required to download the content, it can be downloaded when connectivity is available.

“Mobile working has become a fact of life for executives. We’ve seen business travellers come to expect the same ease of use, design qualities and performance they experience with consumer technology,” said  James Morrish, chief technologist for HP UK & Ireland. “They’ve been bringing more consumer devices into their working lives, but these don’t always meet the requirements of the IT department.”

A new generation of workers coming up through universities may influence how IT supports mobile working in the future. Adrian Mannall, IT support manager at Imperial College, London said: “Students are the ultimate work-anywhere worker.”

Mannall said in the college library at Imperial, the communal work areas were the most popular areas for students, which is reflected in Google-like work environments with bean bags in the breakout areas.

This is apparent in how Reed.co.uk has set up its London office, which Computer Weekly visited in August 2013. Mark Ridley, director of technology at Reed.co.uk, said: “We are trying to make a workplace where we can bring together disparate groups of people who have the space to get into the flow.”