From applications in hospitals to automated cash machines, encryption is a crucial and ever-growing part of our digital world. It's what makes information interchange between different organisations secure. But a far more secure communication technology is now emerging that may eventually displace encryption.

Even the best encryption protocols are not without their limitations. Commonly used encryption methods can be unlocked by people other than the intended recipients; all that is needed is the acquisition of the appropriate key or an exhaustive key search – the latter a brute-force method that relies on computing power to unlock the encryption over a period of time.

What's more, encryption itself does not provide any warning that encrypted information has been intercepted, as duplicates of encrypted messages can be siphoned off without the knowledge of the originator or the intended recipients.

In September 2014, the results of an experiment into using quantum teleportation to transmit the state of a telecom-wavelength photon to a solid-state quantum memory were published in Nature Photonics, a peer-reviewed scientific journal.

In quantum physics, it is possible for two particles to be "entangled" – that is, to behave as if they were a whole – even though separated by large distances. This leads to a useful phenomenon called quantum teleportation. What makes quantum teleportation so interesting is that it allows for the transfer of a quantum state of a photon over long distances, which is potentially very useful in the macroscopic world.

The combination of quantum teleportation with quantum memories opens new avenues of research for quantum computation and quantum networks.

Light-to-matter quantum teleportation has been demonstrated using quantum memories. In these demonstrations, the memory stores a photon entangled to a telecom-wavelength photon (the "flying" photon), which is used to distribute the entanglement necessary for the teleportation.

The state of the photons is referred to as the qubit (a unit of information similar to the bit in conventional computing). Such experiments use fibre-optic cables within their setup – the same cables used in conventional telecom networks.

This is precisely what the 2014 experiment demonstrated, namely the quantum teleportation of a telecom-wavelength photon’s polarisation state onto a solid-state quantum memory (a rare-earth-ion-doped crystal).

The teleported qubit retrieved was essentially unaltered, despite travelling a distance of 25km, thus demonstrating the possibility of long-distance quantum networks with solid-state resources. 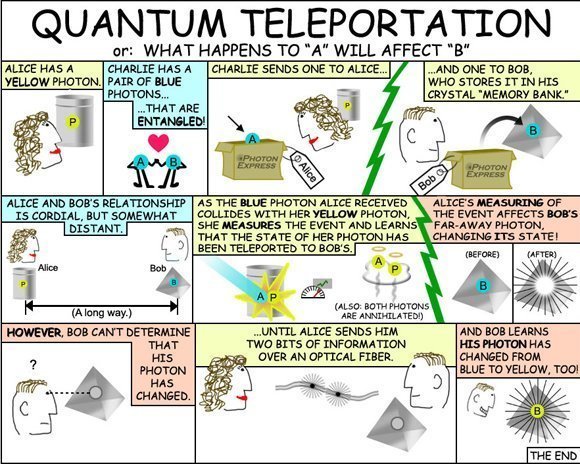 Quantum teleportation - or what happens to 'A' will affect 'B' (source: Nasa)

One intended application under development is the encryption of optical communications with spacecraft in deep space (Mars and beyond), or with astronauts on Mars in the missions planned for 2030.

Data is currently transmitted from spacecraft using radio frequencies, but higher download rates require greater mass and consume more power on board the spacecraft, thus raising its overall cost. Nasa is planning to switch to optical communications, which will provide increased download speeds from deep space for the same mass and power consumption.

To demonstrate deep‑space optical comms, JPL is developing a new form of detector to operate at a more efficient single-photon level. Francesco Marsili (pictured above, adjusting the optical coupling to the superconducting nanowire single photon detectors (SNSPDs) inside the refrigerator), a micro-devices engineer for the superconducting materials and devices group at JPL, who devised the detector, explains: “Nowadays we encode information in the time of arrival of the light pulses; if you have these lasers far away, then to detect when the photon arrives, you need to have a very sensitive detector, which is why we are interested in single-photon detectors.”

A single photon, which has the decryption key encoded, could be transmitted using the existing fibre-optic telecoms network on Earth. It is this quantum key distribution method that interests IT leaders the most, for what it could offer the business community.

Overcoming the cost limitation is an important engineering challenge that we have not tackled yet...because there are still more fundamental limitations to overcome

Quantum key distribution systems are already commercially available, but have only limited uses as they employ attenuated lasers and have a range of up to 300km in optical fibre cables.

Technologies using quantum teleportation are still a long way from commercial viability, due to the resource limitations as well as the high cost and complexity required by the recent experiment.

“The optical fibre that carries the light (which carries the information) has very low, but still measurable losses,” explains Marsili. “So the optical signal that is carried in the optical fibre will be attenuated, and is going to get to the point where the signal-to-noise ratio is so low that it will be impossible to recover what the message was.”

Since quantum physics forbids the cloning of an unknown quantum state, it is impossible to boost the range by amplifying the signal. Signal loss could be minimised by limiting the number of components (each component introduces an element of signal loss) and employing more efficient detectors.

Detectors could be made to be more efficient by cooling them to incredibly low temperatures. “These detectors that had 75% [efficiency] were cooled to 2.5 Kelvin. If you cooled them to 1K or below, you could probably reach 90%,” explains Marsili. “That means the losses, which you now don’t have in the detectors, you now have primarily in the fibre, which means you can have a longer stretch of fibre.”

However, the loss problem can be overcome altogether. Quantum teleportation and quantum memories allow for the use of quantum repeaters, which replicate, rather than boost, the optical signal.

The Group of Applied Physics at the University of Geneva is seeking to realise the quantum repeater, which is the building block of the quantum communication channel, or quantum network. With quantum repeaters installed, quantum teleportation allows the transmittable distance to be extended, thereby overcoming the problem of signal attenuation.

The future of secure communications

Currently, the high cost of the experiment prohibits large-scale development, which is typical for first-time demonstrations. “Overcoming this limitation is an important engineering challenge that we have not tackled yet,” says Félix Bussières, a senior researcher in the Geneva group, and lead author of this work.

“This is because there are still more fundamental limitations to overcome, such as developing better quantum memories. At the pace the field is progressing, however, it should not be very long until this becomes a more pressing matter.”

While there have been various quantum hacking protocols developed, all attacks have been detected. This makes quantum key distribution a powerful tool for communication. Any attempts to intercept a digitally transmitted financial transaction, for example, could automatically void the transaction, with both parties notified of the attempted intercept before the transaction was repeated.

As the quantum teleportation experiment used conventional fibre-optic cables, future implementation would be compatible with the existing telecoms infrastructure.

“Telecommunication fibres have three windows of transmission where absorption is lowest (due to the problems of long distance), and they are around 800nm, 1,300nm and 1,550nm,” says Marsili. “If you use the photons from the paper in the 1,300nm range, where you have a transmission window in a standard optical fibre, you could use a standard telecom fibre to share the secret key.”

This quantum teleportation experiment is just the first step in developing quantum networks. According to Bussières, the next stage will focus on “integrating a new kind of quantum memory that overcomes the limited storage time of the one used in this teleportation experiment. The new kind of quantum memory should be able to store light for tens of milliseconds or more, which is the order of magnitude needed for realising long-distance quantum cryptography (which is based on quantum teleportation).”

For now, the results of this experiment offer a tantalising glimpse into the future of communication security. The possibilities of transmitting confidential information securely and without fear of interception or interference could open up a realm of new possibilities.