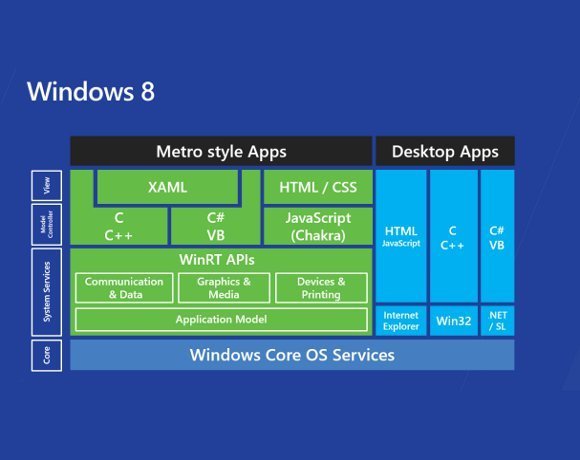 The programming platform is called the Windows Runtime (WinRT). Microsoft created WinRT in a conscious effort to create a new app platform that avoids the errors of the past and is designed for world of connected devices and continuous services. Developers can code for WinRT in either C/C++, .Net languages, or HTML and JavaScript.

The API for WinRT is a subset of the full Windows API and supports a service-based, web application model for connecting to data. There is no client for SQL Server, for example, though apps can use a local database engine for caching data. Behind the design of Windows 8 was Microsoft’s recognition that Windows’ desktop interface would not be suitable for tablets, which is interesting when you consider how former CEO Bill Gates championed tablet PCs running Windows XP back in 2000. Back then it was assumed that users would have a stylus but, thanks to Apple and the iPhone, the expectation today is that you can do most of your work using fingers alone. Windows 8 apps are touch-friendly by default, using chunky controls that are easy to target. Another characteristic is that they normally run full-screen, though on wide displays you can also use a view showing two apps split approximately 75/25 across the screen.

Conceptually the idea is to emphasise content over toolbars and other screen furniture. Arguably this benefits productivity, though some early adopters have complained the enforced full-screen view is too restrictive.