There were 900 charity workers from the World Vision International in Haiti when the quake struck in 2010, but reaching them was impossible.

The personnel records, containing their phone numbers and the phone numbers of their relatives, were held in a building that was about to fall over, said Dale Welcome, advisor for HR technologies at the aid organisation.

If there was one incident that demonstrated why World Vision  needed to become more organised in the way it managed its HR records, this was probably it.

The Christian charity employs more than 45,000 people who support children in some of the poorest regions of the world.

And until last year World Vision had no way to simple way to keep track of its employees.

Personnel records were held in a mixture of spreadsheets, ad hoc paper files, local HR systems, and  in some cases there were no records at all – only a payroll.

Although the charity had been wanting to reform its HR systems for some time, there were always other more pressing priorities for funding.

The turnaround came when World Vision hired a new CEO who brought with him the experience of running large private sector organisations.

Kevin Jenkins, former CEO of Canadian Airlines, was keen to bring some of lessons of the private sector into the organisation.

“Within the first 30 days he approved the business case and the first three years of funding for the project,” said Welcome, speaking in advance of a major HR technology conference.

Welcome joined the charity in early 2010 after retiring from the chip maker, Intel, taking on responsibility for the introduction of the HR Information System.

There was a big contrast between working in the private sector, and working for a multi-national charity, he says.

At World Vision, he had team of 10 people to manage the project with a budget of $5.5 million over three years. A similar sized project in Intel would have commanded a team of 60 or 70 people.

The project team brought together HR leaders, representing the major regions of the world where World Vision operates, to hammer out HR processes  and standards for the whole organisation.

The work took six months. It was a difficult and tedious process to reach agreement, said Welcome.

One of the biggest challenges was winning buy-in for a HR Information System (HRIS) from the people responsible for managing HR in each country.

For most employees, managing HR was just another duty in a job that was already more than full time.

“Many were supportive but others were saying we have never had [an HR system] before, why do I need it. That was a big challenge, if we were to stay on schedule,” he said.

The HR team tried to win people over by visiting regional directors, demonstrating how the HR Information System (HRIS) would benefit workers locally , and encouraging them to champion the project.

That worked for 80% of the time. For the other 20%, it was a case of asking local leaders to mandate the project, but that was always a last resort, says Welcome.

SAP and Oracle too expensive

The charity ruled out buying an HR system from one of the big ERP companies, like Oracle or SAP. It opted for a lower-cost cloud-based solution mid-tier supplier with experience  of working overseas, Meta4.

World Vision began rolling out the technology region by region in 2012, introducing versions in English, Spanish, Portuguese and French

The system now holds personal information, including names addresses, email and emergency contact numbers of 30,000 out of Word Visions’ 40,000 employees. Employees and managers are able to go online to keep the records updated.

In an emergency, the charity is now able to quickly retrieve the contact details for staff in the field.

The charity often works in high risk areas, and sometimes workers lives can be placed in danger. A month ago, for example, two workers were killed in Sudan.

“We have a huge responsibility to take care of our staff, to know their whereabouts and have personal contact information, and to evacuate people at a moment’s notice, “ said Welcome.

Duty of care to charity workers

That duty of care extends to ensuring employees take enough holiday. There is a tendency for staff in the field to work and work, and never take time off, said Welcome.

“Now we can ensure people take time off and can recuperate,” he said.

Effective use of resources

Managers are using the HR system to assess whether World Vision is deploying its workforce in the most effective way, and whether it is devoting the right resources into priority areas, such as providing drinking water or education services.

Administration is also much easier. Previously it would take four to six weeks to put together a head count of employees. Today the process takes a week, said Welcome.

One of the biggest challenges for the HR team is the lack of internet connectivity in many of the areas the charity covers.

“If you think about where we work, and where our employees work, its not the best infrastructure. Places like Burundi, the Solomon Islands and Mongolia,” he said.

In Africa, many of the workers live in small farming communities where there is no electricity. And it is common even for large cities, such as Nairobi, Johannesburg and Bangkok, to suffer temporary power losses.

The charity is making significant investments to improve internet access in these areas. In Mongolia, for example, it has created its own version of the internet, using 300 VSat ground antennas. 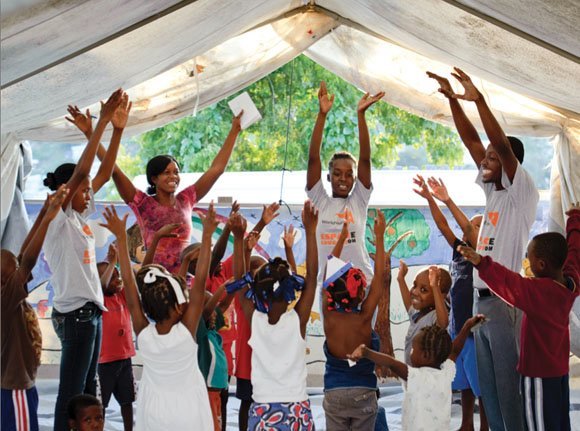 When the quake struck Haiti in 2010, World Vision International couldn't reach the charity workers it had placed in the country

Welcome plans to develop the HRIS further by adding a recruitment module that will go live in November. That will help World Vision hire 7,000 to 8,000 employees each year to fill vacancies or to help it in emergency work.

“We had a very broken process around recruitment, so we are really excited to get that up and running,” Welcome said.

The next state is to build a series of shared service centres that will centralise HR, finance and other services. The first is planned for the US, and the second for SE Asia. They could bring savings of $100m, said Welcome.

But, he says, its important not to lose sight of the bigger picture. “An HR system and the admin around HR is really an enabler for the organisation, and we really need to keep in mind what the larger objectives are,” he said. And that is to improve the well being of 150 million children world worldwide.

Dale Welcome will be speaking at the HR Technology Europe 2013 Conference in Amsterdam, 24 - 25 October.