More than half of employees buy their own devices for work use, according to new report from mobile device management specialist Good Technology.

Half the companies surveyed with bring-your-own-device (BYOD) policies in place said that employees are actually covering all costs, including device and data plans, associated with their personal devices.

Good Technology found that in nearly all businesses that allowed BYOD expenses, prior management approval of employee expenses was required.

According to Good Technology’s 2012 BYOD data report, more than half (55%) of companies currently supporting BYOD do so in multiple countries around the globe. 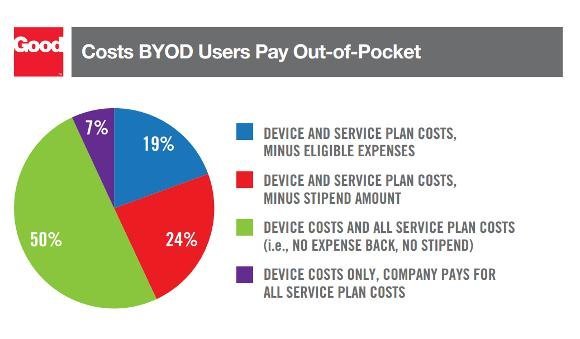 This support has increased nearly 10% from last year, when only 45% of survey respondents supported BYOD in multiple countries.

However, while many businesses may well be supporting BYOD, Dale Vile, research analyst at Freeform Dynamics most companies lack a fully formed BYOD programme.

He said: “We find that most BYOD activity is associated with reasonably high-paid employees who can afford high-end slates and iPhones. These people already have work-supplied equipment, but they also want to connect their own equipment."

Significantly, these extra devices are not key to enable such staff do their job.

“Some employees take the view that the company should pay for the device,” he said.

Another challenge for businesses is that if the company pays or contributes, the amount paid is taxable, since it is regarded as a benefit in kind, Vile warned.

There are also additional support costs for IT to bear.

Even in an environment where the same software is used, as in Office for Windows and Microsoft Office on the Mac, templates for company forms like invoices, HR forms, may not be fully compatible across the two systems.

Vile recommended that the IT department segment users into those where there is a business imperative to allow them to use their own devices, and those where BYOD is non-essential.

The first group will likely be the senior executives and top sales people. The second group will be people who may want to user their own devices, but probably only need remote access to Outlook from their smartphone or tablet.

He suggested that businesses can simplify the financial accounting and support issues by providing a selection of standard devices, rather than encouraging employees to bring in whatever they want.