The latest data from the market analyst Gartner paints a bleak picture of the PC industry. For CIOs, the era of desktop refresh cycles may well be over.

“Tablets have dramatically changed the device landscape for PCs, not so much by ‘cannibalising’ PC sales, but by causing PC users to shift consumption to tablets rather than replacing older PCs,” said Mikako Kitagawa, principal analyst at Gartner.

“Whereas as once we imagined a world in which individual users would have both a PC and a tablet as personal devices, we increasingly suspect that most individuals will shift consumption activity to a personal tablet and perform creative and administrative tasks on a shared PC.”

Before tablets, IT departments would refresh desktop PCs every few years. But thanks to Moore’s Law, the processing power of PCs – even those three or more years old – is easily adequate for running desktop productivity and non-CPU-intensive business applications on Windows 7.

Clearly, there will be some application areas that require high-end workstations and cutting-edge technology. But unlike the consumer market, there is little need for businesses to use high-performance machines that harness the latest in PC technology if they only browse the web and use email.

Ollie Ross, head of research at IT director group, the Corporate IT Forum, said: “Our research would indicate a very cautious ongoing approach to outlay on hardware amongst members, with purchase on an ‘as needed’ basis." She said members of the Corporate IT Forum were increasingly open to people using their own approved devices at work, when used alongside suitable mobile device management software and policies."This shows a very different approach to the near-automatic software update/hardware refresh cycles of relatively recent years.”

IT departments are sweating their PC assets. However, the introduction of Windows 8 in 2012 could force upgrades, due to the new user interface optimised for touchscreens. This is why there has been a raft of new Windows 8 PCs coming to market. But the market data shows Windows 8 PCs are failing to gain traction among discerning consumers and business users.

Business adoption of Windows 8 has remained low. Many businesses are still migrating from Windows XP to Windows 7, due to the April 2014 deadline when Microsoft ends support for Windows XP.

Geoff Connell, CIO of Newham Borough Council said: “We are still rolling out Windows 7 on the desktop and do not expect to upgrade to Windows 8 in the near future.”

Connell believes the desktop will eventually become a virtual desktop infrastructure. “Our next desktop evolution will be a shift to VDI,” he said.

VDI can extend the life of desktop hardware. Certainly at Sunderland City Council, Wyse terminals provide thin-client access to desktop applications running on a Citrix XenDesktop platform in the council’s datacentre. In an interview with Computer Weekly, former Sunderland City Council CIO Tom Baker said: “The terminal uses far less power on the desktop. If it fails, I can use another device to access my corporate applications.”

Baker, who is now CIO at Norfolk County Council, believes thin-client terminals should last longer than traditional PCs since they have fewer moving parts. They can also be replaced as easily as slotting in a new toner cartridge in a laser printer.

According to Pierre Hall, director, workplace and software line of business at Computacenter, organisations are starting to see the value in thin client devices, such as being more efficient for different working styles. "As the popularity of desktop virtualisation deployment has risen amongst enterprises, we’ve begun to see a greater adoption of thin client devices. In fact some of our early adopters now have many thousands of users in their offices."

The cost of touchscreen technology

While Microsoft will argue that one device that functions both as a PC and a tablet is better for users – because they only need carry a single device – Windows 8 Professional hybrid devices are considerably more expensive compared to Android tablets and iPads.

People could buy the lower-end Windows RT, ARM-based tablets, but these lack full Windows compatibility. They compete on price, weight, aesthetics and functionality with Android and iPad devices and cannot be deemed a PC replacement. 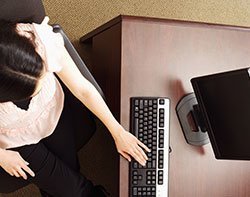 Canalys analyst Tim Coulling, said: “Buyers must decide between an ultrabook and a standard notebook, a touchscreen and a non-touchscreen, as well as an increasing array of form-factors, such as clamshell, convertible and hybrid. This added complexity will make purchases more considered and lengthen the sales process.”

How about on the desktop? Until recently, a touch user interface was a specialist area in business, such as touchscreen kiosks or point of sales terminals in retail or a touchscreens interfaces for manufacturing systems on a production line. Windows 8 Professional aims to make touchscreen mainstream in business.

Windows 8 has been optimised for touch but, compared to desktop LCD monitors, there is a hefty premium put on the price of touchscreen monitors from the leading PC and monitor manufacturers. For instance, Dell’s S2340T 23-inch multi-touch LCD costs £539 (including VAT), compared to £228 for the non-touch 24-inch S2440L LED monitor.

Newham Council’s Connell is not convinced touch is good for business use. “I think the jury is out at the moment on whether the business will want to go to Windows 8 desktop in the workplace, particularly with the interface.  If users get used to it on surface as an iPad alternative, then that could be interesting, but I’m not currently seeing the demand or any really worthwhile benefits over Windows 7.”

So it seems the market for PC desktop refreshes in the enterprise is being eroded on two fronts. First, people are buying low-cost tablets to consume content. Second, IT departments are contemplating deploying desktop virtualisation instead of refreshing desktop hardware. Given that people are also bringing their own devices to work it would seem that now may well be the time for CIOs to reboot their desktop hardware strategy.