A survey of almost 600 custom-built Web applications revealed developers are still failing to eliminate the most commonly exploited vulnerabilities from their code, allowing attacks such as SQL injection and cross-site scripting (XSS) to occur.

You can rely on frameworks to do what they are supposed to do, but sometimes developers don’t understand what their own responsibilities are.

The new Web application vulnerability statistics (.pdf), released last week, come from London-based security services provider Context Information Security. The firm carried out penetration tests against Web applications for mainly UK organisations in both the public and private sector during 2011. It conducted a similar analysis in 2010, and said the 2011 figures show the problem of Web application security is getting worse.

The company discovered two-thirds of Web applications tested in 2011 were found to be at risk from cross-site scripting, and nearly one in five were open to SQL injection. Both techniques are commonly used by attackers to penetrate systems or to trick users into going to an infected website.

In total, Context discovered some 8,000 vulnerabilities, an average of 13.5 per application, compared with 12.5 the previous year. Server misconfiguration and information leakage topped the list of vulnerability categories that also included authentication, session management, authorisation weaknesses and encryption vulnerabilities. The only area of improvement was input validation, which the researchers attributed to increased use of development frameworks that offer built-in input validation security features. 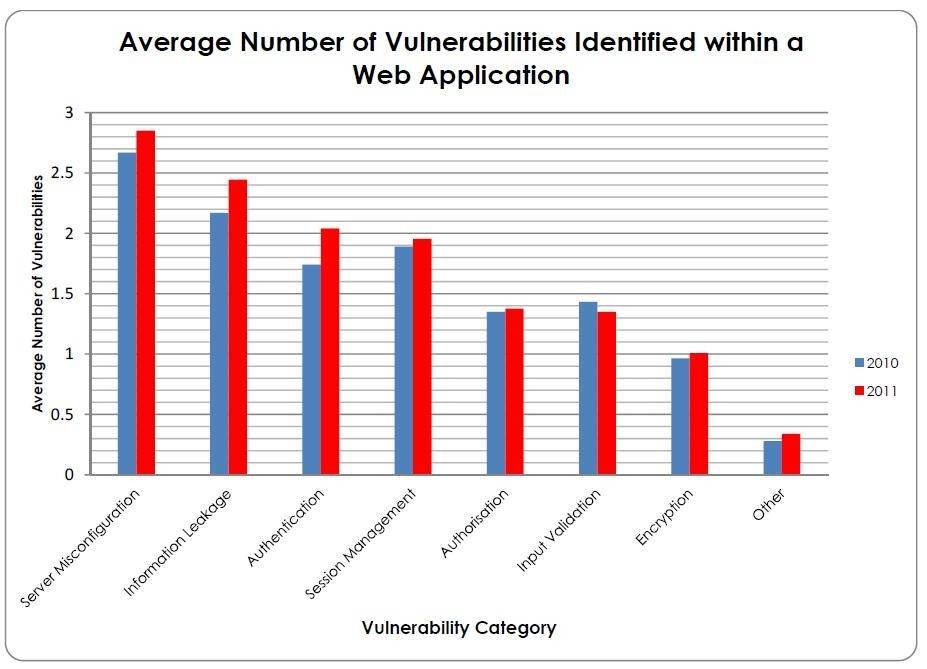 “I’m surprised at the level of SQL injection vulnerabilities because a lot of the frameworks over the last 10 years have evolved so you don’t have to write SQL code any more. You write at a higher level,” said Michael Jordon, research and development manager for Context.

Verizon’s 2011 data breach investigation found SQL injection featured in 14% of attacks and accounted for 24% of all records lost.

A 2011 Veracode study of nearly 3,000 applications found 57% failed to meet an acceptable level of security.

Although Web application development frameworks such as Apache Struts and Microsoft’s ASP.NET handle many security features automatically and do not require the developers to write special code, Jordon said this can lead to developers thinking they can forget basic security. “You can rely on frameworks to do what they are supposed to do, but sometimes developers don’t understand what their own responsibilities are. They assume the framework will do everything,” he said.

The Context Web Application Vulnerability Statistics Report for 2010-2011 (.pdf) can be downloaded from the company’s website.