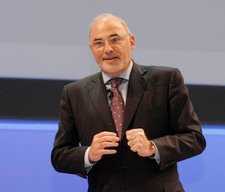 HP CEO Léo Apotheker has shaken his snowglobe once again, with company veteran Ann Livermore stepping down from her role as boss of HP Enterprise to join the board of directors, and new reporting lines for HP ESSN EVP Dave Donatelli and Software EVP Bill Veghte.

In a statement HP said the organisational changes would "increase transparency for these business functions relative to the company's strategic roadmap".

It claimed the moves would sharpen the executive team's focus on customer-facing business and enable closer co-operation between business units.

Livermore, who has been with HP since 1982, has been "instrumental in helping countless customers grow and transform their businesses," said HP. She will continue to serve as interim lead for HP Enterprise Services while a new leader is sought.

HP non-executive chairman Ray Lane said: "[Her] deep relationships with our most important customers, institutional knowledge of the company and its employees, and insights on the technology industry will be tremendous assets to our board of directors."

Meanwhile, along with global sales boss Jan Zadak, ESSN boss Donatelli and Software boss Veghte will now report to Apotheker himself in a move HP said would give their units greater visibility and support within the overall HP structure.

The firm is also moving to streamline its administrative organisation, with the chief administration officer role being made redundant and the role of CIO being expanded, and put more focus on expanding its business in the Chinese and Indian markets. To this end, in addition to their current responsibilities, PSG boss Todd Bradley has been handed responsibility for China, while IPG's Vyomesh Joshi will lead similar efforts in India.