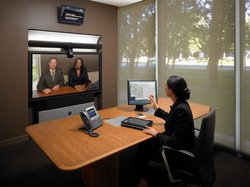 Cisco senior vice president, Emerging Technologies Business Group, Martin de Beer, has claimed that two thirds of the multi-billion dollar installed collaboration market is held by vendors other than Cisco and Tandberg as the networking giant closed the acquisition of the Norwegian mid-market video specialist.

Speaking on a webcast earlier this morning, de Beer toed the party line advocated by his boss and passionate video technology evangelist John Chambers, saying Cisco expects over 90% of Internet traffic to be video-based in the next few years.

Cisco has been moving aggressively into this space, hoping to take advantage of an opportunity currently valued at around $34bn, and the acquisition of Tandberg, initially announced last October, supports this strategy.

As vast swathes of European airspace remain closed down for a fifth consecutive day, Tandberg CEO, and now senior vice president, TelePresence Technology Group at Cisco, Fredrik Halvorsen, said that "all our video rooms and demo centres have been packed with people trying to make sure their businesses can carry on as usual".

In the wake of the eruption of Eyjaffjallajökull in Iceland, the two firms have been talking up an initiative dubbed FlyFree, opening up their demonstration rooms at various sites in EMEA and APAC for firms who are currently unable to fly employees into Europe.


On the technology side, Halvorsen said that in 90 days, Cisco and Tandberg will have a fully immersive, interoperable environment, and full technological integration is anticipated in 12 to 18 months time. Note that baseline interoperability already exists on some products.

De Beer, 'stranded' at Cisco's California HQ after a cancelled flight, hailed a "phenomenal opportunity for all partners as they now have a much more expansive portfolio."

Responding to a question posed by MicroScope, he said the main message to distributor and reseller partners was that it is "business as usual."

De Beer said the two firms had been constrained until now in the amount of resource they could dedicate to managing their channels post-acquisition, but that situation would now change.