Apple has announced that it is to fork out £1.25bn for two new European data centres – one in Galway, Ireland and the other in Jutland, Denmark. 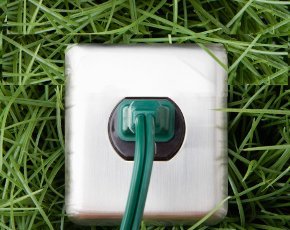 The 166,000 sq. m data centres are due to go online by 2017 and will be two of the largest in the world. Chief exec Tim Cook said that the buildings will have the lowest environmental impact of any of the Apple data centres.

“This significant new investment represents Apple’s biggest project in Europe to date,” Cook said. “We’re thrilled to be expanding our operations, creating hundreds of local jobs and introducing some of our most advanced green building designs yet.”

After Greenpeace named Apple one of the least green tech companies in 2011, the Cupertino company has taken considerable steps to change its reputation and now appears to have forgotten about its once heavy reliance on fossil fuels.

“We believe that innovation is about leaving the world better than we found it, and that the time for tackling climate change is now,” said Apple’s vice president of Environmental Initiatives, Lisa Jackson. “We’re excited to spur green industry growth in Ireland and Denmark and develop energy systems that take advantage of their strong wind resources. Our commitment to environmental responsibility is good for the planet, good for our business and good for the European economy.”

The data centres will power Apple services such as App Store, iMessage, Maps and Siri across Europe. As well as making geographical sense, the most valuable company in the world will get more bang for its buck building in Europe thanks to the current strength of the dollar versus the deteriorating euro.

Similar to the airline industry, Apple now offsets the environmental impact of its data centres by investing in renewable energy capacity. The Denmark facility is expected to capture heat from its servers and transfer it to nearby homes, while the offsetting in Ireland will be done through separate projects.