The final quarter of BlackBerry’s fiscal year 2013 saw the firm ship one million of its new Z10 devices, according to its latest results.

Revenues fell by $49m (£32.3m) sequentially to approximately $2.7bn, but dropped significantly year-on-year from the $4.2bn it reported in the fourth quarter of 2012. 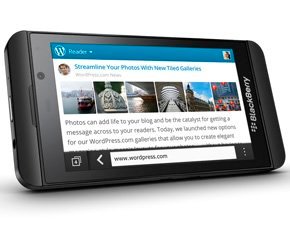 UK revenues grew by 13%, however, accounting for 13% of BlackBerry's total revenues.

BlackBerry revealed it had shipped six million smartphones during the three-month period to 2 March 2013, of which one million were running its new BlackBerry 10 operating system.

But shipments don’t equal sales, and it is unclear how many of these devices have moved from the shelves to customers' pockets.

The number equals that of Nokia’s Lumia products, which sold just over one million in their launch quarter (Q4 2011), but fell far behind the likes of Samsung, which saw nine million of its Galaxy S3 devices sold on pre-order alone.

The BlackBerry 10 operating system (OS) and BlackBerry Z10 handset (pictured) were launched on 31 January, with the device going on sale in the UK, Canada and the United Arab Emirates (UAE) throughout February.

Sales from the US were not included in these quarterly figures, however, and the second BB10 device – the qwerty keyboard-sporting Q10 – is not due until April 2013.

Subscribers to BlackBerry fell from 79 million to 76 million, which the company blamed on drops in the US and European regions – although the number was kept higher thanks to additions in the Asia-Pacific market.

BlackBerry has promised to increase its marketing budget by as much as 50% in the next quarter, to help boost sales for its global launches.

CEO Thorsten Heins remains positive about the firm’s future. “I am really proud of what our teams have delivered here and we are committed to implementing [more] this year,” he said during BlackBerry’s earnings call.

“This is not a one or two-quarter opportunity; [BlackBerry 10] is an opportunity for the next five or 10 years, and our vision is to expand into this new mobile computing platform world.”

The company has also managed to stick to its $1bn core programme to cut costs within BlackBerry, reaching its target one quarter ahead of schedule. Heins also said this was largely to thank for the firm returning to operating profit, after reporting a loss of $518m just three quarters ago.

“To say it was a very challenging environment to deliver improved results could well be the understatement of the year,” he said. “But BlackBerry has gone from a significant operating loss… and here we are three quarters later… returning to operating profit, despite a 23% decline in shipments.”

BlackBerry also announced that co-founder and former co-CEO Mike Lazaridis will be stepping down from his position as vice-chairman of the board and director of BlackBerry from the beginning of May 2013.

His ex-business partner and also former co-CEO Jim Balsillie sold off his entire stake in the company earlier this year, leaving Lazaridis as the largest stakeholder in the firm.

“With the launch of BlackBerry 10, I believe I have fulfilled my commitment to the board,” said Lazaridis. “Thorsten and his team did an excellent job in completing BlackBerry 10. We have a great deal of which to be proud.

“I believe I am leaving the company in good hands. I remain a huge fan of BlackBerry and, of course, wish the company and its people well.”

This story first appeared on ComputerWeekly.com