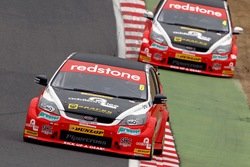 Renamed Redstone Racing for the 2012 season, the firm is hoping that the initiative will bolster ties between the firm and its vendors, which include Brocade and network monitoring outfit Lancope, which has already signed up.

The Accelerated Alliance package will include sponsorship on the team's Ford Focus cars for two races of the season, use of hospitality suites, and tickets for end-user customers.

However, as Redstone sales director Richard Archer explained: "[This is] more than just a sponsorship package.... The Accelerated Alliance is a strategic marketing programme that can really help our vendor partners increase engagement with Redstone and its customers."

To this end, the package will also include seminar sponsorship at Redstone end-user events, lead generation campaigns and sales incentives for their solutions.

Following the season openers at Brands Hatch on 1 April, Redstone Racing's Mat Jackson is currently sitting ninth in the overall standings after a best-placed fourth finish in the second race of the day in a challenging session for the new team.

After a third race off-track excursion, damaging an oil line, Jackson told racing website PaddockTalk.com: "It's not quite the start we wanted but the season is long and we just need to keep plugging away."

Veteran racer Jason Plato heads the table heading into rounds four, five and six, which will be held at Donington Park on 14 and 15 April.