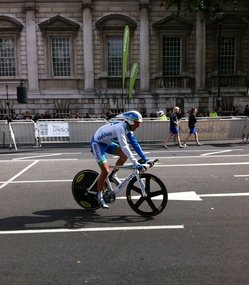 The plans to use the Tour of Britain cycling competition as a platform to push its brand paid off handsomely for NetApp after it finished the week long race with a rider on the podium.

The storage specialist has put its name to a cycling team in order not just to promote the brand but also to link its self with the benefits of a sport that includes passion, very high green credentials and is the fastest growing activity in the UK.

Entering the final day yesterday in London after a week of riding in stages across the UK Team NetApp was well placed with two riders in the top ten.

A challenging individual time trial and then a final ten lap course put pressure on the competition for podium places but NetApp's Jan Barta sealed third place behind Sky's Steve Cummings in second and Rabobank's Lars Boom in first.

Team NetApp also finished with a second rider, Leopold Koenig, in the top ten in the general classification.

Speaking to MicroScope before the race Team NetApp manager Ralph Denk said that the Tour had been a culmination of a strong season for the outfit which has also appeared at the Tours of Austria, Switzerland and California.