Cisco has announced a major reshuffle of its worldwide channel team as it looks to grow its SME business and get more fro  resellers selling into vertical markets.

Three major appointments have been made to support a strategy that aims to develop the channel, grow SME business and expand into vertical markets and emerging countries.

Cisco channel veteran Edison Peres, senior vice president of worldwide channels, takes the role of creating an  organisation that will help develop the vendor's reseller base.

Dubbed as the new "Channel Chief" Peres will be in charge of all aspects of worldwide channel management including distribution and reseller marketing and training.

Leading the charge on developing vertical markets and covering emerging countries will be ex US and Canada country manager Wendy Bahr who will head a new organisation as senior vice president of global and transformational partnerships.

The final change is to hand the responsibility for developing the channel penetration of the SME market to Dave O'Callaghan, who becomes vice president, worldwide commercial sales. He had been running worldwide distribution and the vendor is now on the hunt for a replacement for that role.

Keith Goodwin, senior vice president of the worldwide partner organisation at Cisco, revealed the changes on a blog post.

"To capture the multi-billion dollar opportunities in front of us, we must work together to broaden our focus on architectures, verticals/solutions, emerging countries and new consumption models, such as XaaS," he wrote.

He said that the changes would put Cisco into a strong position to develop the channel as it moved into 2011. 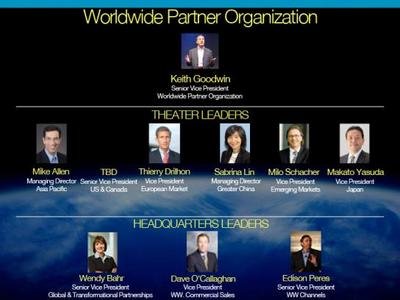