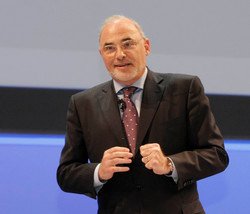 HP has made former SAP boss Leo Apotheker its CEO and president just seven months after the board at the German software maker issued him with a vote of no confidence .

The move underscores a new intent for HP, a company with a history steeped in hardware and consumer markets, but that has handed control to someone with a background in enterprise software earned over two decades at SAP.

"Leo is a strategic thinker with a passion for technology, wide-reaching global experience and proven operational discipline," said Robert Ryan, lead independent director of the board at HP.

The previous boss Mark Hurd ran a tight operational ship right up until early August when he famously resigned from HP, then helped to cause a rift with Oracle by joining them as president.

It is therefore an interesting move for HP to tap up Apotheker, who competed directly against Oracle during his tenure at SAP, and will be head on with them in many more markets now as the ICT industry consolidates and converges.

"As we move forward, HP will continue to be a valued partner with our customers as well as a fierce competitor. I look forward to working with the outstanding people at HP to write the next chapter in the company's long and proud history," said Apotheker.

HP has also elected Ray Lane, managing partner at Kleiner Perkins Caufield & Byers as a new board member and non-exec Chairman. Both Lane and Apotheker start from HP's fiscal New Year on 1 November.

"Mark Hurd's transformational cost cutting and operational focus brought profitability across the company, but HP's low-level sales engagements and engineering culture made growing revenues a challenge," he said in a blog post.

The appointment of an executive vice president of sales would certainly help HP, he continued, "centralising sales and marketing" to foster greater collaboration and cross-selling.

"Admittedly he was forced into cost reductions by the major downturn in SAP's fortunes as the market contracted. But he failed to get buy-in for the company's response," he said.

Apotheker managed to upset customers as well by trying to raise maintenance fees as the economy showed signs of fragility, Carnelley added

But he reckoned HP's software business has struggled to "make its mark" and the new CEO may have some solutions to improve its standing in the global arena.