With most year-on-year sales comparisons not truly indicating a return to the more buoyant levels of 2008, it is useful to see how a month-on-month comparison shows the climb out of decline. 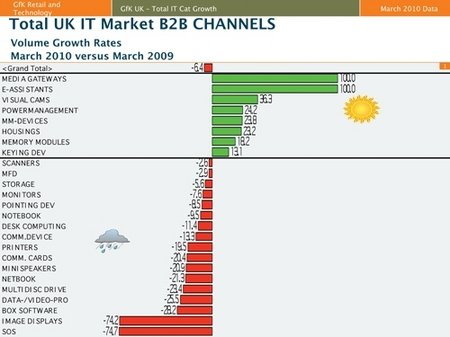 As can be seen in the charts, there are still quite a few product categories in steep decline comparing March 2010 to 2009. March has shown some positive signs, with less volume decline at only 6.4% and value decline at 3.1% than a similar February comparison. These declines have been supported by large drops in storage, monitors and comms devices, which hold higher absolute volume market share. There are product categories which are recovering faster.

Looking deeper into the charts there are some positive indicators for the server market as well as premium products (for reference, servers are reported in GfK's desktop category). Power management, housings, desktop, storage and memory modules all show positive growth in either volume or value.

These positive products are server-related items and are often seen as a sign of server market recovery. Stripping out the fact that the average selling price of desktop PCs in 2009 went from £300-£400 to £400-£500, the 11% increase in value shows that the unit sales in desktop are much higher priced, which is more in line with servers than desktop PCs.

Storage has had volume declines, but the value is in growth, meaning the higher-end network-attached storage and storage arrays are increasing in volume.

Another significant fact in the charts is the turnaround of multifunction printing. While volume remains in decline at 2.9%, the value has recovered to a growth of 36.3% The value increase points to business model printing, which in turn could lead to an increase in managed printing services.

Isolating the months is invaluable at this stage of the recovery as buying patterns of businesses have been less stable since the start of the recession. Last year clearly showed substantial decline when compared to 2008, but looking at these charts we can see elements of a turnaround.

This is supported by the recovery of the IT mail order channel, which offers a less service-oriented range but more ad hoc purchase support.