Some thought it might never happen, but the day has finally come. Windows 8.1 has overtaken Windows XP in the market share monthly update. 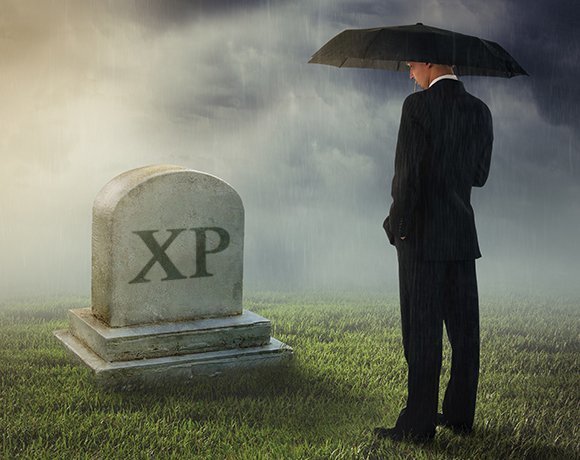 That’s right – at long last, the legacy OS has been resigned to the scrapheap. While Windows 8.1 remained relatively stable, increasing its share from 12.88% to 13.12% month over month, Windows XP came crashing down to earth, dropping from 14.6% to just 11.98%.

So why the mass exodus away from Windows XP? Well, it seems as though terminating support, leaving the operating system entirely vulnerable to attacks was not enough to dissuade users; but offering users a free upgrade to Windows 10 – that’s the ticket!

While Microsoft hasn’t been forthcoming with prices for Windows 10 after the one-year free upgrade programme, Newegg appears to have inadvertently leaked the numbers. It looks like an OEM copy of Windows 10 Home will cost $109, while an OEM copy of Windows 10 Professional will cost $149. As American vendors rarely give the UK a break when it comes to matching US prices, handlers of the Great British Pound can safely assume that Microsoft won’t use an exact dollar to pound conversion in its pricing strategy.

This seems to be the prevailing theory as to why Windows XP’s share of the market is finally dipping.

But for all those proud ex-Windows XP users, eagerly awaiting their free copy of Windows 10 at the end of the month, Microsoft today revealed that they might be waiting a while longer.

In a blog post, executive vice president of operating systems Terry Myerson revealed that Microsoft would be taking a phased approach to the launch of Windows 10.

“Starting on July 29, we will start rolling out Windows 10 to our Windows Insiders,” Myerson wrote. “From there, we will start notifying reserved systems in waves, slowly scaling up after July 29th. Each day of the roll-out, we will listen, learn and update the experience for all Windows 10 users.”

So for those genuinely chomping at the bit to get their hands on the flagship OS, the obvious answer is to sign up to the Windows Insider programme.

As for enterprise users, Myerson said: “Windows 10 Pro will be available on July 29, along with Windows 10 Home. Volume licensing customers will be able to download Windows 10 Enterprise and Windows 10 Education on Volume Licensing Service Center (VLSC) starting on August 1.”

In other news, all eyes are firmly on July 14, as Windows Server 2003 reaches end-of-life. Just what the impact will be on enterprises has been a source of great debate for several months now.

Big Data analytics provider, CloudPhysics, crunched some numbers, which revealed some interesting statistics. Examining data collected between June 2013 and June 2015, the firm discovered that one in every five Windows Server VMs runs Microsoft Windows Server 2003. That’s one in five that will be affected by the EOL.

Furthermore, the analysis found that if the current rate of decline for Windows 2003 VMs is maintained, it will reach a statistically insignificant level in the first half of 2018 - three years after the EOL date.