IBM expects nearly half of its revenue to come from emerging businesses such as cloud, analytics, security and mobile by 2018. 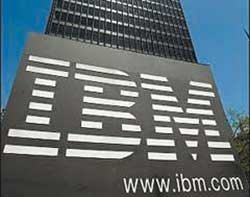 At the annual investor meeting in New York yesterday, executives said that by 2018, they expected $40bn in annual revenue to come from high-growth areas such as cloud and security, shifting IBM away from its reliance on non-renewable tin.

Cloud, analytics, mobile, social and security software represent approximately $25bn in revenue for the hardware giant at the moment; so the ambitious aim is to nearly double the turnover of these divisions in less than three years.

To get the ball rolling, Not-So-Big-Blue is investing $4bn into these ‘strategic imperatives’, according to Reuters.

IBM has had a tough couple of years convincing investors that it is agile enough to turn this corner. In 2013, it was the only stock in the Dow Jones Industrial index that finished in the red and in 2014, shares decline by 15%.

Revenue has fallen for the past 11 consecutive quarters, forcing the New York-based company to shed many of its not-so-profitable businesses.

Shares were up by just 0.6% in after hours trading following the news.