We have entered the home stretch; after more than seven years of planning the London 2012 Olympics will soon be upon us. Before a TV audience of billions, over 10,000 athletes from 196 countries will compete in 300 medal events in 26 different disciplines over 17 days.

The scope of this project is truly spectacular, and behind the scenes a mammoth technology infrastructure will swing into action to support the Games. MicroScope went behind the scenes at the London Organising Committee (LOCOG) nerve centre to spend a day with Acer, official worldwide Olympic Partner and supplier of desktop, notebook and server hardware to the Games.

A four-year evolution
Acer's Olympic story began four years ago 2008, when it won the hardware partner contract, previously held by its sparring partner Lenovo, and London 2012 will in fact be its second Olympics, having previously covered the 2010 Winter Games in Vancouver.

Michael Trainor, Acer services product manager for London 2012, explains that the firm had to lock down the specification as far in advance as possible so that it could guarantee it had absolutely everything needed to supply LOCOG's needs with exacting levels of consistency.

To this end huge amounts of product were reserved and shipped, and with the Games barely three months away some of it is only now coming out of storage.

But this is not to say that LOCOG has thousands of out of date machines on its hands. There have obviously been changes; the estate is now running Windows 7 for one thing.

Moving with the times, Acer has now thrown 100 tablets into the mix as well, and Trainor considers the the mobility play is likely to become more important in the future. "At the next Games, we'll see tablet use increase exponentially because they're so useful at the venues," he says.

The ongoing evolution of the project can be seen in other areas, too. For example, the introduction of a Hyper-V environment has brought storage and server costs down significantly.

All told, by the end of the Games Acer will have delivered 13,500 PCs, including 2,000 notebooks, 96 Terabytes of storage and 900 Gateway- and Altos-branded servers.

"We have to show that we can deliver a project of this scale using equipment that's standard from our product roadmap," says Trainor.

The idea is to demonstrate to other potential customers that they can get the same service for themselves. For Acer this is truly the case study to end all case studies. 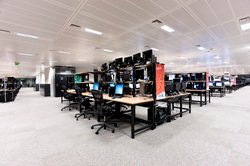 Inside the Games
The heart of Acer's Olympian operation sits in LOCOG's home on the 20th floor of the CitiGroup Centre at Canary Wharf, from where there is a clear view to the Olympic Park at Stratford. Here are housed the Integration Test Lab (ITL) and the Technology Operations Centre (TOC).

The ITL is currently where the bulk of the action is taking place. Here, 26 distinct cells, each representing one of the 26 Olympic disciplines, have been set up.

Each sport has its own unique software applications and requirements, and it is here that these packages are put together and the integration between Acer's hardware and the specialist software is put through its paces.

By the start of the Games the equipment in the ITL, which opened in January 2011, will have undergone 200,000 total hours of testing.

Before the Games, each cell will be decommissioned, packed up and shipped to its host venue; the equipment in the ITL is not just for demo purposes, it is the actual kit that will be delivering results in the field.

It is therefore vital that this part of the equation is done right. "The IOC don't want anybody talking about technology at Games time, because if they are, we've not done our job," says Trainor. 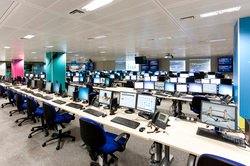 A fortnight before curtain up, the focus of the action will shift from the Test Lab to the Technology Operations Centre (TOC).

The vast TOC installation will be running 24-7 throughout the Games, monitoring and supporting the entire Olympic IT infrastructure.

A vital part of its role will be to spot and diagnose any failures in the system. The 'right here, right now' nature of the game means that if something does go wrong it is critical for it to be fixed as soon as possible. To this end, explains Trainor, "we will have spares at each venue and we will just hot-swap out the malfunctioning kit."

For issues that cannot be resolved in the field, it will also provide the central point of escalation and a single contact point for the escalation of any critical technology issues to the Main Operations Centre, and LOCOG's other Functional Command Centres.

An Olympic legacy for the channel
One of the buzzwords often heard when the subject of the Olympics comes up is 'legacy'. What is to become of all the purpose-built venues? Which football club will take over the stadium? Will the athletes' village be sold off as private or social housing? Will the Games inspire more people to take up sport?

These are the big questions that surround the lasting effects of the Olympics, but there are also more mundane questions to be dealt with. Having trained up 350 people and supplied 13,000 PCs to the Games, Acer will embark on a major redeployment exercise.

The matter of what to do with the workforce is relatively simple. Although the Sochi 2014 Winter Games are still two years away, the implementation process will be ramping up, and for many Acer staff, a move to Russia will be on the cards, says Trainor.

As for the equipment, Acer is turning to the public sector, and the channel, for their help in ensuring the Olympic hardware estate has a long and useful life.

With three partners on board, European Electronique, Probrand and Softcat, Acer will make a range of base unit, monitor and PC bundles available to the education sector.

These bundles, starting from £7,999, will include 10 units that were used in the Games, badged and certified, 20 brand new Acer units, and classroom management software.

Buyers taking advantage of the offer - which runs until 31 May - will receive the new equipment prior to the Games, with the Olympic Games products delivered in November.

Acer UK education development manager Colin MacFarlane says: "Acer notebooks used by London 2012 have already been offered by LOCOG to schools in the London boroughs hosting the Olympics. The offer was incredibly popular, as I'm sure the new Olympic bundles will be."