It is exactly a year ago to the day that changes were made to the Employment Rights Act 1996, granting any employee the right to apply for a flexible working arrangement, with the only proviso being that they have worked for the company for at least 26 weeks. 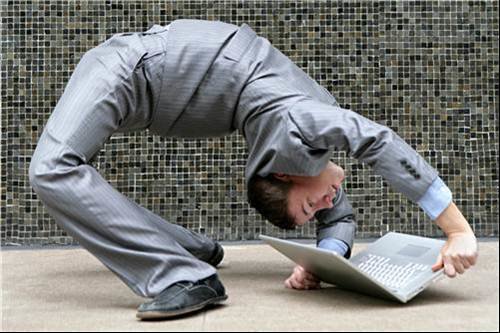 At the time, the change in legislation was seen as a triumph; a progressive step towards redressing the balance between the ‘always on, always connected’ lifestyle and the archaic nine-to-five office culture. It was widely assumed that HR departments would be inundated with requests. No longer would we be restrained or restricted by the shackles of our demeaning and dilapidated desks. No sir. No longer would be subjected to sweltering heat and downright inhumane conditions, brought to bear by the 8:04 via Tunbridge Wells. No sir. To paraphrase Dr. King, ‘Free at last, thank the government almighty, we were free at last’.

But, a year on, and we still have not reached the Promised Land. Research released by Microsoft today found that while more than half (53%) of SMB employees were aware that of the new legislation, uptake remained uncomfortably slow.

And it hasn’t been through lack of effort on the part of employees. According to the study, a not insignificant 22% of SMB workers have applied for flexible working as a direct result of the legislation; but they seem to be hitting brick walls. Despite the changes in legislation stating that employers must give reasonable consideration to any application for flexible working, more than half (55%) of all businesses still require employees to work from the office within designated working hours, while 44% said that working from home was not possible under any circumstances – period.

So for this reason, the answer cannot lie within the law. The legislation is a mechanism to empower employees and a framework for employers to follow – but it is not the solution.

There remains a gaping chasm between company policy and company culture when it comes to flexible working. The studies and statistics finding in favour of flexible working continue to come out thick and fast. Microsoft’s research found that only one in ten employees have had their best work idea in the office. A whopping 80% of employees that had been granted flexible working said that it had a positive impact on their working life.

Unless you get your research from the University of Yahoo, it is almost impossible to find a study that does not find in favour of flexible working, but even then, the internal culture of many small and medium organisations seems transfixed and the model of yesteryear.

“Business leaders should reimagine how workers operate,” says Dave Coplin, chief envisioning officer at Microsoft UK.  “According to the Office of National Statistics, productivity levels in the UK are stagnant and lower than the start of the recession in 2007. There’s never been a better time to change since there’s a risk that firms are cultivating an environment that traps staff in process and red-tape instead of giving them the opportunity to think and have the necessary head-space to be creative.”

At the risk of sounding pious, the answer must come from within; and more specifically, from above. As with any cultural shift, change starts at the top and trickles down. Senior management must not only embrace these policies; they must champion them. Only then, will we, as a people, get to the Promised Land.