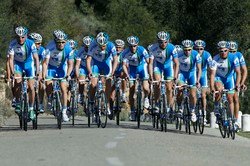 The channel is full of people with passions as deep as their respect for technology with the focus this week falling on those that share an interest in road cycling.

With the Tour of Britain starting yesterday and running across the country all this week there will be many that have a love of two wheels keeping an eye on the action wondering whether or not the Manx missile Mark Cavendish can hold onto the leader's jersey and checking on the progress of some of the other big names in the world of cycling.

But not everyone simply watches from the roadside and riding in the Tour this year is team NetApp and once again providing the IT support for the competition is cloud specialist Outsourcery.

Team NetApp came about after the vendor looked for a sport it could be involved in that would inspire its staff, resellers and customers and display a passion at the company that goes beyond IT.

Andreas König, senior vice president and general manager EMEA at NetApp, says that as the result of the sponsorship, with cycling being one of the few sports where the team takes ther sponsors name, it has given it a platform to involve resellers in events, cycling simulation competitions and given them a chance to bring customers along to events, which so far this year have included the Tours of Austria, Switzerland and now Britain.

He says that the Team NetApp website is getting around two million hits a month and it has tracked those with around 80% coming from the world of IT.

"From all over we have had a lot of good interest from the IT world and we did a survey of our customers and prospects and asked them if they knew about Team NetApp. The customers liked it and it meant they would go for us rather than someone else because it provokes a very positive emotional feeling," he says.

König himself is a keen mountain biker but since the involvement with road cycling he has also moved onto to using thinner wheels.

The Tour of Britain provides a great chance to get the involvement with cycling known to an even wider number of people: "There is a lot of interest in the Tour and the big teams are showing up and big cycling teams create great exposure."

When it comes to understanding the benefits of exposure the official IT supplier to the Tour of Britain knows that with an event that packs up each night and heads for a different part of the UK it's an ideal way to show that cloud services really deliver.

Outsourcery was the official technology partner last year and it provided the tools required to gather analyise and share information gathered throughout each stage of the race. It also provides the wi-fi connections for journalist and photographers as well as the infrastructure for the Tour organisers.

Piers Linney, co-CEO of Outsoucery, explains that the Tour organisers have to be able to get access to an infrastructure providing emails for hundreds of people during the event, compared to their normal staffing levels.

"As soon as the event finishes they are al;ready planning for next year it never really stops for the organisers," he says referring to the way the involvement from outsourcery is far more than just during the week of competition.

That flexible expansion plus the need for cloud services in the middle of fields as the journalists file copy during the event makes the cloud a natural way of delivering the Tour's technological requirements.

But as well as getting the chance to talk about the Tour as a cloud case study there is an additional element that comes from being involved in the event.

"Cycling is the new golf. It is the fastest growing sport in the UK and it fits in well with the Olympics next year. It fits with our corporate culture very well and it gets you out and keeps you fit," he says.

The Tour does a lot within the communities it visits as part of the route and Outsourcery has also been able to get involved and do its bit to promote the sport and the causes that are involved with the Tour of Britain, particularly the Prostate Cancer Charity.

With plenty in the channel likely to be taking an active interest in what happens at the Tour over the next few days the chance to mix business and pleasure has never been greater than at an event involving both Outsourcery and NetApp.

The Tour of Britain
Most people will be familiar with the Tour de France, the three week epic that takes up most of the summer, or the Giro d'Italia the Italian tour or the Vuelta a Espana, the Spanish grand tour that finished last weekend with a Brit in second and third.

The Tour of Britain is run on a slightly smaller scale, only lasting a week, but takes in some of the sights of the country, along with some of the hills, before arriving this Sunday in London for the final stage.

The race is run over eight days and nine stages, with an individual time trial included on the final day in London.

This year some of the most well known riders are taking part, including Mark Cavendish who won the sprinter's Green Jersey at the Tour de France and won the Olympic warm up last month. There are plenty of British riders taking part with the likes of Team Sky participating.