By
Personally, I'm obsessed with the continuing story of White Space, the invention that uses unused parts of the TV spectrum to create a new form of wi-fi. The upshot is that large parts of the Britain - unreachable parts of the countryside, can now get broadband. Well, they could do in 2012.

Am I the only person who gives a monkeys? Write in and tell me.

In this latest chapter of the story, boffins have successfully tested the system at 5.4Mbps.

TTP is successfully streaming iPlayer HD video at speeds of over 5.4Mbps, across a 5.6km white space link from its research centre near Cambridge to a house in the rural village of Orwell.

The early success of these trials demonstrates the potential importance of white space connections - which take advantage of unused TV spectrum - to deliver fast and cost-effective rural broadband to some 600,000 poorly served homes and business, as well as for new applications such as remote smart metering. 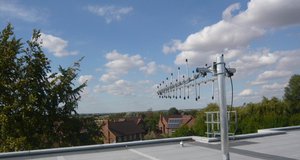 White space broadband has a practical range of up to 10km, versus just 4km for typical wired ADSL connections and the cost of deployment will be significantly less than fibre over long distances. While white space works much the same way as Wi-Fi, TV spectrum signals travel farther, are better at penetrating walls and require fewer access points.
"The TTP white space link is very much still work in progress but we expect to rapidly reach speeds of greater than 12Mbps over 6km using a single TV channel," says Richard Walker, Head of Wireless at Cambridge-based TTP . " compared  to wired ADSL broadband that struggles to achieve 2Mbps with less than half the range"

Consumers will have to purchase a second TV aerial to go on the roof or in the attic, along with a white space router similar in size and price to that of an existing home router, Charges will be equivalent to current ADSL costs.
Where can I get a White Space router?

Who makes them? Seeing how this is a British invention, you'd hope that a UK company is knocking out  White Space routers in some factory in China.

Is this a big opportunity for comms dealers or telcos. Who will sell these services?