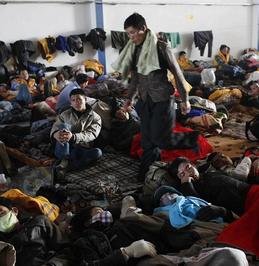 Thousands of guest workers and Libyans have already fled the country, and many of those not lucky enough to be picked up by the SAS are ending up in a transit camp approximately six kilometres inside Tunisia, said the charity.

TSF, alongside the Red Crescent - the Islamic world's version of the Red Cross - is providing telecoms services to the displaced population.

Many of the refugees claim to have been stopped at several checkpoints in Libya, where the SIM cards of their mobile phones were confiscated by authorities still loyal to the regime.

The first TSF team arrived on 24 February at the Ras Jdir frontier post (pictured) near to Ben Guerdane, the closest Tunisian town to the border crossing. A second team, sent as reinforcements from the international headquarters of TSF, is about to join them.

On 25 February, more than 200 calls were offered to the population, with 98% of those calls being placed to Egypt, which had many thousands of expats working in the oil industry.

Crowds of people are waiting in long queues to make phone calls, said the charity.

TSF is also working with the United Nations High Commissioner for Refugees, the Tunisian Civil Defense and the European Commission's Humanitarian Aid Department.

In the rush to provide priority needs to refugees, such as food, water and medical aid, small comforts such as the ability to place a call to loved ones can be forgotten, and the importance of some little extra frills shouldn't be underestimated. Those keen to donate to TSF's work can do so online here.

A version of this story first appeared on ComputerWeekly.com