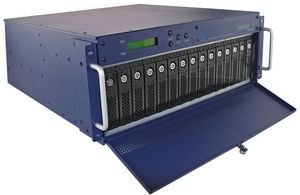 The Veracity Coldstore. It's the Carlos Tevez of storage. It's not exactly pretty, but you're not buying it for its image rights. You want it because it'll give you a fabulous return on your investment. Gooaallllll!

UK company Veracity has developed a sequential data storage system for video, audio and time-based linear recording that saves half the energy by using its patented Sequential Filing System (SFS).

The logic is that with video data, 97 per cent of disk activity consists of writing to disk. So Veracity developed a system that focuses on writing only on one disk and one back-up disk, with the other disks in the array lying idle. This substantially cuts power consumption and heat.

Coldstore's storage arrays have 15 removable disk drives providing up to 30 TB of storage.  Writing data sequentially, to each disk in the array, minimises read/write head movement and heat. By powering one disk at a time all the other disks can be switched off when idle.

It's hard to quantify the cost saving but it uses just 50 Watts, which works out at or 0.6p per hour at a rate of 12p per kW/h.  The unit is cool and needs no cooling.