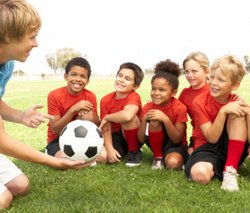 One should never name drop - the Queen told me that - but I was talking to Sir Geoff Hurst and ex-England international Gareth Southgate on Sunday about how dire coaching is in Britain.

The parents are to blame, we all decided. Football is the only activity where you learn while people shout at you from all directions, said Southgate.

True, but he's only half right. There's IT too.

Southgate said that we have to create the right environment where people will want to learn. There needs to be more doing, and less inertia while we listen to some blowhard who loves the sound of his own voice (I think he was still talking about football, but it's a perfect metaphor for IT training). Geoff Hurst said we need to make things fun for people learning the game.

Still, at least the FA is doing something about it. They've got McDonald's (yes, I know) to put up some of their marketing money to fund better coaching.

If only some big IT companies would do the same for the IT industry.

Wouldn't it be great if some of our top brands were prepared to fund better grass roots training in IT? It's not as if they'd be out of pocket, this would be a pure branding exercise.

One supermarket chain already does something similar. They take a fraction of the billions they've saved through off-shore tax avoidance schemes, and use it for publicity purposes, with a 'Computers for Schools' scheme (of course, if they cared so much about schools and hospitals they'd pay their taxes in the first place. But there's no brand value in silently paying your dues).

Even today's revolutionaries are brand fanatics. Where would UKUncut and Occupy LSX be without Twitter, Facebook and Windows 7? You'd have thought they could have cooked up some open source systems between them but no, they're not doing any demos without a premium IT brand to win them a bit of confidence.

Some revolutionaries. But that's why a top HR specialist said student demos are an excellent hunting ground for future executives.

"Half of the demonstrators will work in marketing," she lamented. "If only I knew which half."

Meanwhile, if people wanted to be really revolutionary, they could do worse than to create their own counter-culture with Drupal. It's got a fantastically supportive community, any of whom will help you to develop.

Founder Dries Buytaert told me that. But I shouldn't name drop; he's got a new project, now.