We hear a lot about the BYOD trend and the consumerisation of work as people take their tablets into the office. Well hang on, surely there's a lot of traffic going the other way. What about the corporatisation of the home? As the boundaries blur between consumer and work technology, many homes now pack as much processing power as the office.

Given that consumer and business technology has merged, it's surprising that nobody ever talks about how business technology is being subsumed into the home. But that must be happening, as more and more people seem to work from home. The domestic computing technology in most houses is more powerful than that which NASA used to put a man on the moon. If you buy a top of the range TV set from Panasonic, it has six processors in it, each more powerful than the mainframe my local authority used to employ to number crunch all the council business. 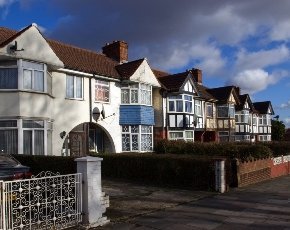 But none of the technology or the business processes seem to be integrated or fine-tuned to any level of efficiency.

If you want to know what this trend feels like, try marrying someone in the book trade who works from home. You become a permanent receptionist, as 'work' endlessly sends inventory out to your house, seemingly one book per delivery driver at a time, throughout the day. Wouldn't it be more efficient to put all the books, invoice pads and posters in one box? How much would you save by canceling nine of the vans and paying one driver to deliver it all?

The drivers say they spend all day going to the same addresses. No wonder there's so much traffic on the road. It's all these white vans, being despatched by simpletons who never give any thought to saving their company any money because it's not their problem.

Hang on, I'll be back in a second, there's someone at the door…

Anyway, at Panasonic's Annual Convention in Nice this week, there appeared to be even more evidence of the trend for home technology to become more business-like. Televisions are no longer for passively watching. The new TVs have got Internet access, special pens for annotating on screen and all the web apps you'd normally have to access at an office chair while squinting into a much smaller screen. There's even a TV camera for web conferencing/Big Brother-style spying. Now you're never away from work. Even when vegging out on the sofa you won't be allowed to switch off any concerns about the office.

The entire Panasonic range of consumer products has been hijacked by the office. Video, social media, still images, web access, games: they're all part of the big data that you're expected to contribute to the company.

"The channel has to be more creative about how it speaks to customers."

Panasonic is planning to invest an unspecified glut of resources in expanding its channel of dealers and independent resellers. Surely they should be doing something to train IT resellers to address the home market. Why? Everyone works from home these days. Why should resellers differentiate? If you can configure a TV – with its millions of functions – for a home user, adjusting all the settings for a cloud service will be a piece of cake.

Surely any reseller that can integrate home technology with work would become very attractive to corporations. They certainly need to think more creatively, according to David Preece, Panasonic's audio visual marketing director. “When people buy anything now, most of their research is done online before they even speak to a reseller. So the channel has to be more creative about how it speaks to customers. They have to adapt and we're aiming to help them fight back,” says Preece.

To this end Panasonic will be announcing a major nationwide channel training plan, where it will take an army of 2,000 sales people and training experts to 20 major hotels and organise a number of small scale expos and seminars. If you already sell Panasonic DECT phones, PBXs and laptops, why not make the leap into selling cameras and plasma screens? It's all business equipment now, even the TV.