Was it an awkward social engagement over vol au vents in Barcelona, with a moody IT salesman who was furious that your ghost writing on his behalf didn’t capture his wit, generous nature and free spirit? 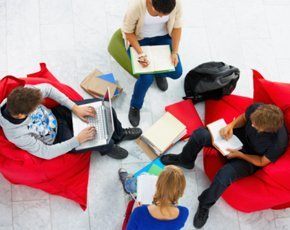 The worst meetings happen when there’s a communications breakdown. As do the best.

A total shambles is as good as it gets, meeting wise. It allows you to kick back and do anything you want because nobody will notice.

It took a long time, but I’ve learned to love those multi-national presentations where hundreds of people gather to hear corporate jargon translated simultaneously into dozens of different languages. The translators, being normal people, can never keep pace with interpreting IT jargon and marketing gobbledegook. As a result the presentation is meaningless in several languages and impossible to follow. And the beauty is that everyone is too polite to point this out.

So the whole event will be a multi-million euro fiasco. But, apparently, there’s an even more devastating way of wasting time and money.

A recent YouGov survey for workflow arriviste Clarizen has identified status update meetings as a major form of waste. Clarizen, whose software creates the right environment for productive collaborations, reported that people up and down the country are bored and frustrated with status meetings.

British workers can spend three to four hours and even all day on what they describe as frustrating, waffling bore-a-thons, characterized by show-boating colleagues, poor chairmanship and irrelevant topics.

Over a third of British workers say they’re a waste of time and four out of ten say they multi-task during status meetings, checking email and doing other work.

Surely these complainers are missing the point. The whole point of a modern meeting is to give you some quiet time, when you can quietly get on with a single task undisturbed. The rest of the day has been ruined by the millions of communications channels (from Skype to SMS) we are forced to monitor every five seconds. With the result that our attention spans have been…. Oooh look! There’s a butterfly!

“These results underline how much of the working day can be taken up with preparing for and attending status meetings, which then aren’t an effective use of people’s time,” said Avinoam Nowogrodski, founder and CEO of Clarizen.

I think that’s what he said. I was too busy stuffing boiled sweets in my face, working on my shopping list and drinking coffee.