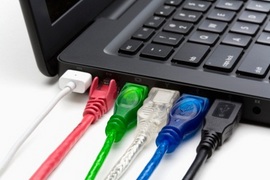 If you were alien to the IT industry, you might wonder why Wi-Fi gets so much publicity, when it's clearly outperformed by cable.

So imagine if mobile and Wi-Fi were the older encumbent technologies and cable was the new invention that was being hyped furiously as the Next Big Thing, the fashionable alternative to boring old fuddy duddy dinosaur technology Wi-Fi (Wi-Fi? ha! My dad still uses that).

What would the chattering classes be saying about it?

We take you now to the studios of BBC Breakfast, where a tame analyst is explaining the mysteries of this new cable craze...

"So explain to our viewers what on earth this new cable thing is that all the kids are going crazy for?"

Well, the analyst would explain, there are hundreds of benefits, but the main ones are superior quality of service, faster throughput, resistance to interference, consistency and standards of security.

"Whoa!" the TV presenter would say. "You're confusing me now with these technical terms. Can you explain what this means for the man on the Clapham Omnibus?"

The analyst would explain the advantages by using simple language and waving his arms around, which is not insulting or patronising at all for the man on the Clapham Omnibus.

If South London man used cable, he wouldn't be able to get an internet connection while travelling on the bus, the analyst might tell the TV host.

"That sounds incredibly liberating," the host would say, "it means I could have some quiet thinking time without being bombarded with constant data."

But it gets better than that, the analyst would explain. Once you are inside your office, and you 'cable up' your laptop, the benefits when you go online are amazing.

"You know all those 'drop outs' you get with Wi-Fi? Doesn't happen with cable. It's got a special plastic coating that protects you from interference and the cable itself ensures you get a consistent connection. And here's the real killer application - the speed of internet connection can be much faster!"

"I understand Stephen Fry has already raved about this new coaxial cable on his blog," the host would add, giving this new-fangled cable invention the celebrity validation it needed. Cables To Go is now a household name, he would say, even I know they are the market leader.

Yes, that's right, the analyst would say. "But you don't have to buy top of the range coaxial cable. There are other options, such as twisted pair."

Ooh, these funky technical terms will be part of the national lexicon soon, the host would conclude. I'm sure my daughter knows what they mean.

So, could cable kill off Wi-Fi?

Of course not. They will happily co-exist, as each has its own merits. Naturally, as more powerful mobile devices aare used for work they will need access to faster mobile networks, be they Wi-Fi or 3G or LTE.

At the same time, the need to access high capacity fixed networks for data intensive, low latency tasks is unlikely to ever vanish.