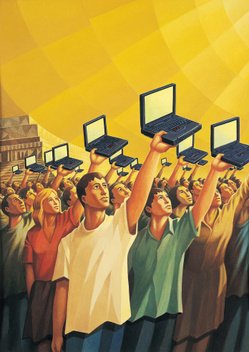 London is lagging behind Manchester, Amsterdam, Paris and Stockholm in mobile cybercrime, according to a new risk analysis report commissioned by Norton. But a new initiative involving the GSMA and the Wireless Broadband Alliance (WBA) could see London assume its rightful place as the leading hub of cybercrime. Which is great news for IT security vendors and their channel partners!

Norton has released its Top 10 Riskiest Online Cities report, covering the UK and Europe. To the consternation of many Londoners, who like to think they should be top of every list, the UK capital has been overshadowed by three European rivals, Stockholm, Amsterdam and Paris. Worse still, Lancashire hotspot Manchester tops the league of riskiest online cities.

Mancunians are clearly living on the edge compared to their soft Southern risk-avoiding counterparts. A major contributor to this situation, says Norton, is that Manchester has three times the number of Wi-Fi hot-spots as the capital.

As a result, there are 25% more attacks in Manchester than London even though the towns have near identical demographics; in both cities 82% of each population uses the internet and 75% of households own computers.

Research leader Bert Sperling, founder of Sperling's BestPlaces, which performed the analysis, says he matched data on lifestyle with cybercrime data from Symantec, maker of Norton products, to create an 'holistic' view of the contributory factors. The biggest difference is that Manchester is a more of a hip and happening place for smart phones, social networking and rogue intruders from unsecured Wi-Fi hotspots.

If social networking is to play its part in driving more IT security channel business, by making everyone less secure, the conclusion seems to be that towns need more wifi hotspots.

Could the GSMA and the WBA have the answer? Yesterday they announced plans to simplify connectivity to Wi-Fi hotspots from mobile devices by developing technical and commercial frameworks for Wi-Fi roaming.

By unifying the way devices attach to the Wi-Fi network, they could help send risk surging upwards and create a massive sales opportunity for the channel.

"Easy, secure mobile connectivity via Wi-Fi roaming is a win-win for consumers and operators worldwide," said Niels Jonker, CTO at Boingo Wireless. "The pressing need for seamless Wi-Fi roaming is finally bringing all the key players together."

Good point. If the security resellers want clients who beg to be rescued from the lawless, then Wi-Fi probably has to be seamless.