Adapt for the era of virtual distribution 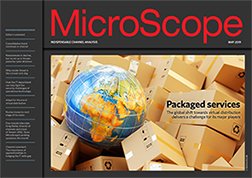 This article is part of the MicroScope issue of May 2019

At an investor conference in January, Tech Data CEO Rich Hume revealed virtual distribution billings were growing at 36% per annum and the distributor would “do a lot more virtual distribution moving into the future than we will physical distribution”. Speaking at the 21st Annual Needham Growth Conference in New York, he said the distributor had surpassed more than $1bn of annualised virtual distribution billings, and forecast that growth in this area would outstrip Tech Data’s overall business growth by two-to-one, possibly as much as three-to-one. Hume added that the shift towards higher growth rates in cloud, software as a service (SaaS) and infrastructure as a service (IaaS) would not necessarily affect the relationship between vendors, channel partners and customers. “The change is in the delivery model,” he said, “not necessarily in the relationship.” His comments give rise to a number of questions. Is the shift to virtual distribution likely to be as pronounced as Hume believes? If it is, how prepared are distributors for...