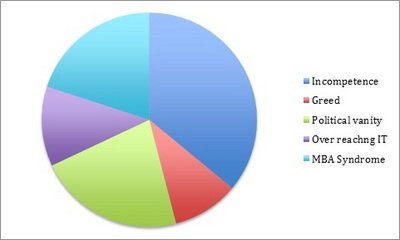 No evidence of corruption has been found in the NHS IT cock up that has cost the UK taxpayer £12.8 billion.

The root causes, according to a spokesman for Campaign4Change, which campaigns for Government IT reforms, are accountability (50%), over ambitious salesmen (30%) politically driven motives (10%) and sheer impracticality (10%).

As the spokesman pointed out, big national IT schemes tend not to work. Many in the administration were working on their first IT project.

There's still much to be investigated, and too many missing details to list, says the Campaign4Change spokesman.

"We need a full breakdown of all the central costs, such as hotels, travelling, expenses, PR," he says.

"Then we need the costs to the NHS of the wasted work. We need details of the LSP's (local service providers) contracts themselves. We need full breakdowns of the money paid to the LSPs, which some say is excessive.

"Tony Blair was too easily lobbied by Bill Gates and other suppliers on how easy it would be to modernise the NHS using computers."

The tax payer isn't finished yet, There's billions worth of bills still to land on the doormat, warns the campaign, and yet more is due to be spent with CSC and BT.

The final costs probably about £8bn-10bn, much of which is questionable value for money.

What were the fundamental mistakes?

The programme (NPfIT) was always too ambitious. It's a bit like building a bridge from UK to US - a good idea but impractical.

But when salesmen suggested the technological equivalent of doing just that, within the NHS, Tony Blair, his officials and health ministers ushered the computer suppliers into their offices and said: "Would you like a chair?"

They had good intentions - modernising the NHS - but it's hard enough to replace one patient administration system within a single hospital, let alone replacing and integrating systems nationally.