A private matter for Zuckerberg 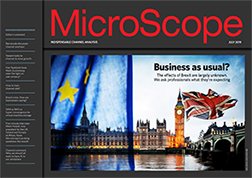 This article is part of the MicroScope issue of July 2019

Did anyone else do a double-take last week when Facebook CEO Mark Zuckerberg uttered the following four words to an audience at the company’s developer conference: “The future is private.” That’s right – Zuckerberg, CEO of a company that has been at the centre of a number of political storms about its misuse of private user data over the past few years, was suddenly telling everyone – well, not everyone, but he knew it would get out to a wider audience – that Facebook had experienced a change of heart (did someone actually manage to find it?) and had been converted to the cause of user privacy. Kudos to the company boss for acknowledging that his pledge was unlikely to be taken at face value, given Facebook’s past (mis)conduct. “I get that a lot of people aren’t sure we’re serious about this,” he said. “We don’t exactly have the strongest reputation on privacy right now, to put it lightly. But I’m committed to doing this well and starting a new chapter for our product.” I’m guessing that Paul said something similar after his ...