The Indian CIO Salary and Career Survey, 2012 : The full package

You must be keen to know the salary hike expectations of your CIO peers for the current year. As you may have already read in our previous reports on ‘The Indian CIO Salary and Career Survey, 2012’, the outlook is positive. Before we look into 2012 prospects, let us first delve into the trends in 2011.

The year 2011 story with respect to salary hikes and bonus payouts for the Indian CIOs seems to be positive, according to ‘The Indian CIO Salary and Career Survey, 2012’ conducted by SearchCIO.in. The picture appears rather rosy, with just a single unfortunate respondent admitting to a pay cut last year. (Figure 1. Hikes and Bonuses: The Indian CIO’s Experience in 2011).

Amongst the percentage hikes received by the Indian CIOs in 2011, the band, ‘Greater than 10% but lower than 20%’, has emerged as the most common one, with 39% of the CIO respondents falling within this range. Close to 11% respondents state that they received a ‘20% to 29%’ hike and 14% mention a ‘Less than 10%’ hike last year. (Figure 2. Percentage hike received in 2011) In effect, the average salary hike that CIOs enjoyed last year works out to 14.09%.

Most Indian organizations follow April to March as their financial calendar. Their employee appraisals and salary hikes are linked to this cycle. While the appraisals season ends by February, hikes and bonuses are usually given in April.

The last year’s positive experience has evidently buoyed the Indian CIO community’s optimism. As a result, a very large majority of our CIO respondents (89.7%) expect to receive a raise in the current year, and 43.2% look forward to a bonus as well. (Figure 3. Salary hike and bonus expectations for 2012).

Compare this with the global CIO Salary and Career Survey conducted by SearchCIO.com during the same period. The global CIOs’ expectations look to be more in line with the economic reality. Only about 53% respondents of that survey expect to see a raise in the current year. 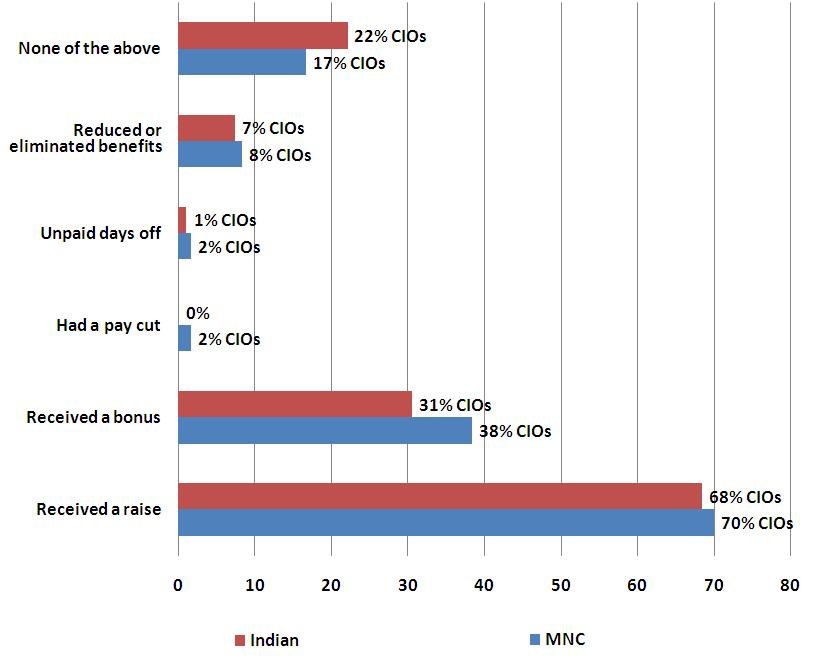 Although multi-national companies (MNCs) are better paymasters than Indian organizations as we have seen in the article, The Indian CIO Salary Survey 2012: How much does the Indian CIO earn? The picture is different when we compare their performances with respect to hikes and bonuses these organizations give to CIOs. This can be seen through the Indian CIO’s experiences in 2011, as well as their salary hike and bonus expectations for 2012. (See Figures 4 and 5) 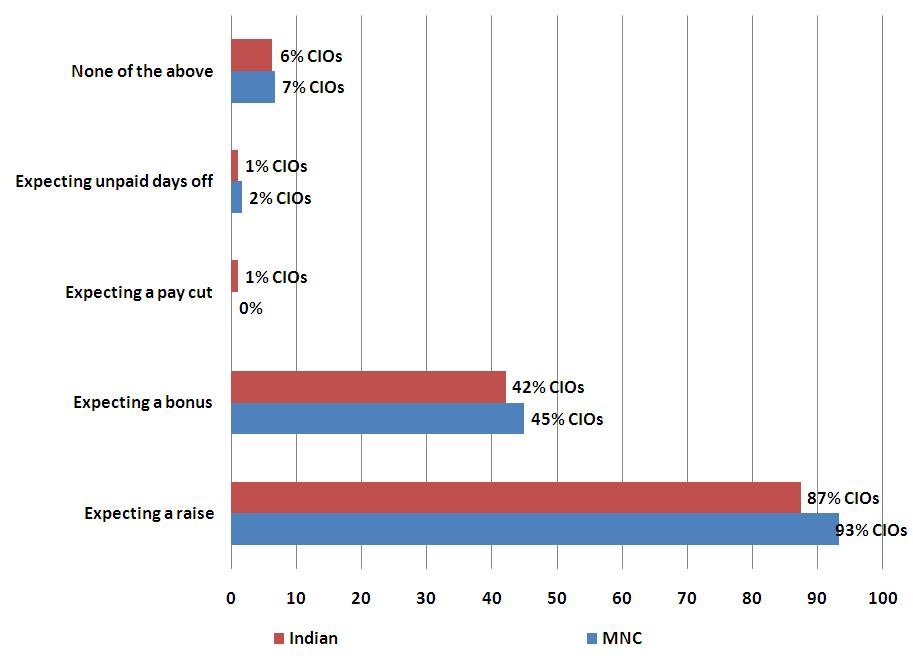 Read more on IT governance