This article can also be found in the Premium Editorial Download: Computer Weekly: Political turmoil threatens global IT services sector

Let’s face it, we aren’t keeping up. As Erik Brynjolfsson, a professor at MIT Sloan School of Management and a Leading Edge Forum (LEF) advisory board member, said: “People are falling behind because technology is advancing so fast and our skills and organisations aren’t keeping up. It is the great paradox of our era.”

Executives cannot fully understand the business opportunities and requirements of the 21st century organisation unless they first upgrade their own digital skills with first-hand experience and understanding of the technologies being so rapidly adopted by the market and the digital mindset that surrounds them.

The pace of technology change and the shift to a digital world has been so great that it’s little wonder busy executives have had trouble keeping up. So many things have changed so fast that the people at the top, even in successful organisations, and even in IT, don’t really understand what is happening, and don’t realise how dangerous that is. There are six key ways in which this is significant for today’s organisational leaders.

A parallel digital world is emerging

There are now two worlds that we inhabit. One is the physical world we see every day – buildings, trees, roads. The other is a digital world we aren’t biologically equipped to see but is, in fact, all around us. This is the digital infrastructure world of radio, Wi-Fi, satellite and phone networks, which connect us – or rather, our mobile devices – every minute of every day. We get great utility out of this of course – being able to make mobile phone calls, use navigation tools and get access to the internet – but because we don’t see this digital world, we forget or fail to understand its full impact.

Our phones are internet of things data collection devices for any organisation we casually sign up to join. Through our devices, we are all leaking data wherever we go, pertaining to everything we do, to people we may not want to know.

We need to be human online too

While the relatively formal email has become the backbone of online communications for the older generation, with social media we are able to share anything easily with selected or public groups, meaning we now need to learn how to be human online too. Marshall McLuhan’s observation that “the medium is the message” warns us that these powerful communication mechanisms cannot simply be used in the same way as older channels. As Deepak Chopra, the globally renowned speaker and writer on the mind and body, said, “social media is the next phase of humanity” because it connects us in ways that have not been available before.

There are five human characteristics that are now mirrored online:

Not using these mechanisms – for example, not maintaining a presence on Facebook – is often a skills issue (set up, use, security configuration, etc) but it manifests itself as an aggressively out-of-date, anti-technology stance in the digital world.

The term “consumerisation of IT” was coined over 10 years ago, when LEF first identified that the rapid development of consumer technology and its adoption outpaced the speed at which organisations could themselves keep up or develop new technology to match what was available on the open market.

Underlying this, of course, was Moore’s Law – the doubling of transistors on a silicon chip, and therefore its computing power and speed every 18 months. Moore’s original law was about integrated circuits, but it has proved true for all technology and associated software – networks, mobile phone capability, online entertainment, online banking and camera technology – which is why consumer technology adoption has moved at such a pace.

Add this to the speed of innovation and business model disruption coming out of Silicon Valley and all the other tech hubs in the world, plus the race to zero – offering more for less in the pursuit of competitive dominance – between technology giants like Apple, Amazon, Facebook, Microsoft and Google, and you get a dizzying onslaught of change brought about by technology. The relevance, utility and value of all this change has to be contextualised and considered by firms and individuals.

It’s getting ever easier to create new software and services

As significant as Moore’s Law has been to the speed of computer hardware, application programming interfaces (APIs) have been the software equivalent, transforming the speed of connectivity.

If everything can talk easily to everything else, like the adoption of English as the common business language throughout the world, then at a company level you don’t have to build everything from scratch in-house – you can just plug elements of software and services together to create new services. It’s like Lego.

For individuals, it means being able to create what the free web-based service If This Then That calls “recipes” between technologies to help them run their lives – for example, getting their car to talk to the garage door, or their fridge to talk to the supermarket.

A Matrix built on cross-industry capabilities is emerging

Like roads, telephones and electricity in the 20th century, an ever-more capable digital ecosystem is becoming the underlying business infrastructure of our time. Whereas in the past each major industry sector had its own vertical stack of processes and systems, firms must now leverage powerful horizontal capabilities that are used across many industries.

These new capabilities are radically transforming many aspects of business and society, and will only get stronger over time. We refer to this emerging set of services as ‘the Matrix’. While we could have easily used existing terms such as the internet, the web, or the cloud, we believe that the metaphor of a matrix best captures the growing friction and synergies between the vertical and horizontal worlds.

The Matrix of cross-industry capabilities is emerging:

We need new 21st century skills and competencies, organising and educating for ‘digital’

In parallel with all the technology change, the world’s infrastructures and educational establishments are organising for digital and requiring new skills. Putting the word “digital” in front of everything has become a bit of a cliché, but it is what is happening. Everything we do is becoming digital to the extent that in a few years we will drop the “digital” because everything will inherently, partially or wholly, be digital in its nature.

Interestingly, a digital upgrade starts with psychology. We aren’t stupid. It’s not that we can’t get digital or learn what people would have us believe all millennials know inherently – they had the time and the technology and we didn’t. It’s because we have wired up in our heads several reasons why we can’t start the upgrade. Here is a list of a few which might sound familiar:

So, we have to work on our mindsets and take personal responsibility for upgrading and learning new skills to become a 21st century human. Going clockwise from Listening and learning, here are some great reasons to convince you to take action: 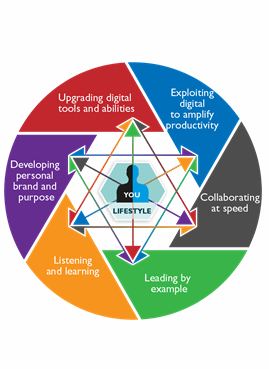 To help make the change, executives need an immersion in the technology, not just a one-hour presentation, to provide real haptic sensing experiences as well as the time to be shown how to set themselves up for success.