ComputerWeekly.com’s IT blog awards came to a crescendo last night as we named the winners at our awards night at Shoreditch House in London.

About 100 invited bloggers and guests joined us for the announcement and to celebrate with us the UK tech blogging scene.

This was the second year that ComputerWeekly.com has run its IT blog awards and this year’s event proved to be bigger and better than last year’s.

We added new categories to reward individual IT professionals, both male and female, and we also added a category for the IT twitter user of the year, recognising the massive impact that twitter has had on the blogging scene.

So this year’s awards were more popular and more intensely fought. We also attracted sponsorship from IBM. Thanks to IBM’s support we were able to celebrate the UK blogging scene in style by holding an awards night at the fantastic Biscuit Tin bar in Shoreditch House.

This awards is really about celebrating the UK IT blogging scene and to reward all those bloggers, who religiously blog and produce fantastic content.

It’s hard work blogging and it often doesn’t get the recognition it deserves. I really hope that ComputerWeekly.com’s blog awards goes a little way to rewarding all those bloggers.

Congratulations to last night’s winners and runner-ups and those who made it on to the shortlists. If you won, you won because your peers in the industry voted for you, and for that reason you should be justly proud.

And a special congratulations to last night’s overall winner, Graham Cluley, whose blog about security, took the best of the best award.

A full list of winners and runner-ups can be found on ComputerWeekly as can photos from last night’s shin dig! 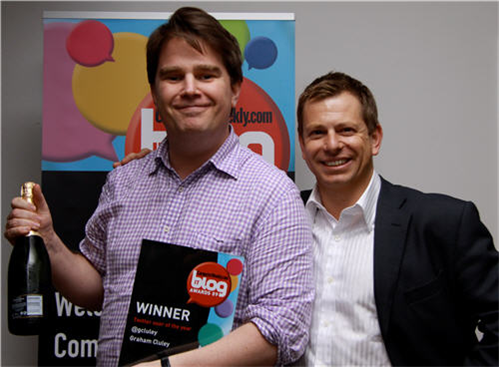